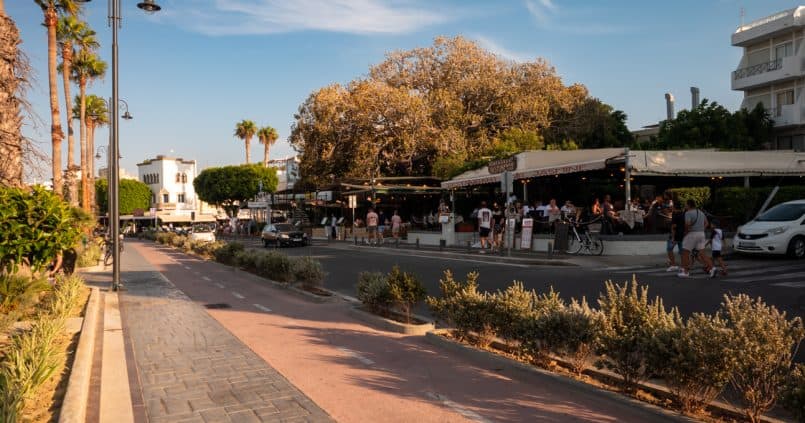 After a few days of nothing but Kos Town, I decided to get out of the resort and see a bit more of the island today. Not wanting to waste the gym membership though, I started the day with an early workout after breakfast and still managed a quick dip in the sea as well.

I didn’t want the expense of hiring a car again, so I wanted to find a resort that was fairly accessible by local bus. Tigaki is a popular beach town on the northern coastline, about a 20-minute drive from Kos Town. Buses run hourly in peak season, so I had my pick of when to travel. I wasn’t planning to spend the entire day there, so I chose the 1 pm bus which got me into the resort just before 1:30 pm.

As Tigaki is mostly a beach resort, after departing the bus I walked west towards the salt lake and cut onto the beach there. Most of this section is filled with umbrellas and sunloungers operated by small huts where you can get drinks and snacks, but I think you have to pay for the sunbeds themselves.

To save money, I continued west and found a fairly empty stretch of sand to throw down a towel and catch some sun. The beach is definitely nicer than Kos Town and the sea is also clearer and shallower, so I can see why it’s a popular resort.

If I hadn’t been in Greece for so long already and built up a decent tan, I would’ve struggled to stay out in the full sun for much more than 30 minutes. However, with regular dips in the sea, I managed to last a good couple of hours before deciding that I ought to find some shade! I was also getting hungry, having skipped lunch for reasons that I can’t really remember now!

Food and Back to Kos Town

Heading off the beach towards the dirt track that runs directly behind it, I walked back in the direction of the town centre until I found a taverna called Alikes. It looked reasonable, so I sat down and had a much needed cold beer with some garlic bread and tzatziki. I knew there was a bus back to Kos Town at 4:25 pm, so I made sure to leave the taverna in time to walk back to the bus stop and catch a ride back to the capital.

Feeling somewhat drained from the long period of sun exposure, I had a nap in my room, then showered and went out for dinner. I probably should’ve tried some other restaurants, but fancied Chinese again so I ended up returning to Twin Dragon because it was so tasty! I did make a mental note to explore a different part of Kos Town for food tomorrow though.