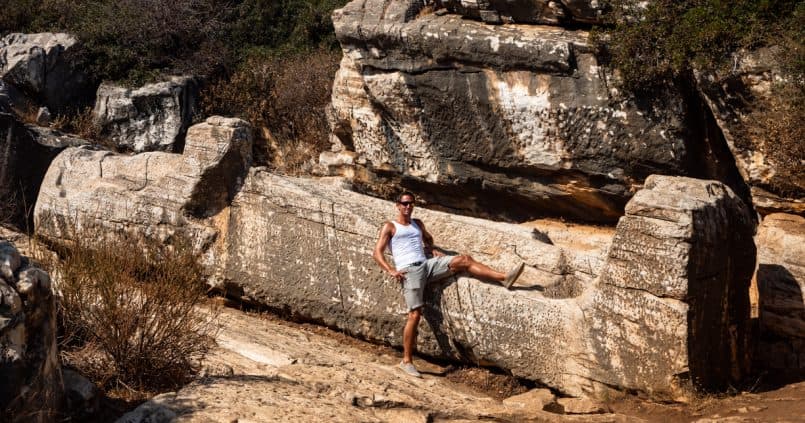 Getting Out and About

I’ve seen quite a few of the most popular sights on Naxos already, so my first task of the day was planning an itinerary of where to go once I picked up the hire car. I decided it would be fun to visit the 3 Kouros statues, one of which is to the north of the island just outside Apollonas, and the other two are near a place called Melanes in the centre of Naxos. I also chose to visit Moutsouna on the eastern coastline as well as Alkyo beach on the south-western coast.

Putting all these together, my plan was to start off heading north to Apollonas, then follow the road south and take the turning to Moutsouna, before crossing back west to Melanes and finally south-west to Alkyo. Depending on the time, I would either have dinner in Agia Anna or, hopefully, Naxos Town before returning the car later in the evening.

I left the hotel just after 9 am having been told the car would be available from 9:30. I knew I’d arrive early but was hopeful I might be able to take the car sooner if it was already waiting. Motopower is located on the corner of the main road through Agia Anna at the southern end, parallel with the small port where the day boats depart from.

By the time I’d completed the usual paperwork, it was nearly 9:30 anyway but the car was there so I did manage to get going a few minutes early. One bonus that I hadn’t realised when I reserved the vehicle yesterday is I was told I could return it tomorrow morning by 9 am. This meant I could definitely use it this evening to have dinner and explore Naxos Town.

The drive to Apollonas takes about an hour from Agia Anna and isn’t the most exciting of journeys. Once you pass Naxos Town, the road across the north of the island is rather twisty and not very picturesque. The first Kouros statue is just outside Apollonas, on the main road as you head south. There is no parking except on the side of the road, but when I arrived there was only one other car and I doubt it gets that busy – there is literally nothing to see besides the statue itself.

It is impressively large, as you can see in the above photo – featuring me so you get a sense of scale!

As for Apollonas itself, I could have stopped in the village but had visited a few years ago with my friend Ed and wasn’t that impressed, so I decided to get back on the road and push on to Moutsouna.

The road south between Apollonas and Moutsouna is slightly more impressive than the first part of my drive, but again quite twisty in places and it takes about an hour, so it was nearly lunchtime by the time I arrived.

I didn’t actually realise until I got there, but Moutsouna is famous for being the site of an important emery transportation system between the mines and the port where it could be offloaded onto ships. Several elements of the cable system still remain as a monument to the trade, including the statue pictured above and some of the loading cranes at the dock pictured below.

The resort itself is small, with just a few tavernas behind the small port and a selection of accommodation dotted around. The beach is compact, but sandy and with very clear water making it ideal for swimming and sunbathing.

After walking around taking some photos and videos, I decided to stop here for lunch knowing that I might not have the opportunity to eat again until later in the day. I can’t remember the name of the taverna (forgot to write it down!) but it was the one directly behind the beach, just to the left of the port. I had a club sandwich and a glass of white wine, both of which were delicious!

Once I’d finished my lunch, I got back in the car and headed inland to see the remaining two Kouros statues at Melanes. Once again, the drive took about an hour, passing through the pretty village of Apeiranthos which is well worth a visit if you’ve never been.

Finding the entrance to the Kouros statues was more difficult than I expected – I missed the turning on the first attempt as it’s on a sharp bend as you head towards Melanes, but found it after turning around and driving more slowly! There is a small amount of parking at the end of a dirt road, but again it wasn’t busy when I arrived so I had no issues finding a space to stop.

The first of the two Kouros – known as the Flerio Melanes Kouros – was just a couple of minutes walk from the car. The statue is much smaller than the one at Apollonas, but still quite impressive given how old it is.

The second statue is much further and took about 10-15 minutes. It’s also not shaded unlike the first one, so I got pretty sweaty trying to find it!

After a quick stop for photos and video, I headed straight back to the car and fired up the air conditioning to get cooled off before continuing my journey.

My final sightseeing stop of the day was to the southwest of Naxos at a place called Alkyo Beach. Though I’ve visited the western side of Naxos several times, I’ve never made it this far south so it was another place to check off my list. This time, the drive only took 40 minutes and a lot of it was on a nice straight road so it’s pretty easy to reach.

Besides the beach itself (pictured above), which is a fairly large expanse of soft sand and mostly clear water (it’s rockier at the western end where this photo was taken), the area is famous for the ruins of a large hotel complex that sits abandoned on the headland. Some of the bare walls have been covered with graffiti, much of which is impressively designed.

After walking around the ruins and getting some video footage for my Naxos YouTube video (see the end of this post), I got back in the car and drove north back to Agia Anna. It was about 4 pm when I arrived at my hotel, so I had time to rest and shower before dinner.

Grateful that I wouldn’t have to return the car until tomorrow morning, I could take my time this evening visiting Naxos Town to walk around and have a nice meal. Naxos Town is one of my favourite places in Greece, with a pretty harbour area, lots of shops, cafes and tavernas and just the right amount of people to give it some atmosphere without feeling overcrowded.

On my way from the car I passed Creparea, one of my favourite places to stop for a sweet treat – I skipped it this time, though, as I didn’t want to spoil my appetite for dinner, but I’m sure I’ll be back again soon! I then continued along the harbour all the way to Apollo’s Gate, the most famous and recognisable tourist attraction on the island.

Before heading back down the harbourfront, I stopped at a ticket office and purchased my ferry ticket for tomorrow morning’s crossing to Ios. For dinner, I returned to a restaurant called Dal Professore at the south end of the harbour, where I enjoyed a nice pasta meal with fantastic sunset views.

Feeling suitably stuffed, I strolled back to the car and then drove to the hotel, thankful I didn’t have the usual long walk from Agia Anna centre to get back to my accommodation.

Most of the things I talk about in this post can also be seen on the YouTube video below.