Booking our Covid tests…or not!

After the usual hotel breakfast at 8, we chilled out for a bit before walking down to the bus stop to catch the 9:30 bus to Apollonia. The primary purpose of the journey was to locate the medical clinic we’d found online so that we could book the required Covid-19 lateral flow tests ahead of our upcoming return flight to the UK.

The bus arrived on time and the ride to Apollonia only takes 15-minutes or so to arrive at the central stop here. Before exploring parts of the village, we decided to head straight for the clinic here with the intention of getting our tests booked so it was done and out of the way. After a short, if slightly dangerous walk along the busy main road, we arrived at the clinic only to notice a sign on the door stating that all appointments have to be made online via email… oh well!

Despite this slight setback to our plans, we at least knew where the clinic was and felt more confident booking via email having seen the sign confirming this was the right procedure and where to address the email.

Not wanting to waste the trip, we spent a while exploring the narrow Cycladic streets, stopping for a coffee at Botzi 93 bar, which has a nice open terrace with good views of the surrounding area. We didn’t stay too long, though, as we planned to return to Apollonia in a couple of days’ time to do some proper sightseeing.

We managed to catch the 11 am bus back to Kamares, returning to the hotel to change before heading back to the beach again, opting for sunbeds at Kyma for a slight change of scene (okay, it’s right next door to To Kohyli!) and also for a bit of variety at lunch.

We remained at the beach until just after 4, then headed back to the hotel to shower and rest up. At 5:30, we decided to meet and take a stroll around the south side of the bay, past the port. We could see a couple of structures further along the bay and wanted to see if we could reach them.

As we passed the first structure, it became apparent from the smell that it was some kind of water/waste treatment facility (i.e. sewage!), so it was a little unpleasant for a minute or two, but we soon got clear of it and continued along the stone and mud path, which begins to elevate towards the final structure.

I’m still not sure what the structure is: perhaps the remains of an old lighthouse or given the thick cables running past, maybe it’s something to do with the island’s electricity supply – who knows?! Either way, it was a good spot to get another photo of Kamares from a slightly different perspective:

Sikinos Wine and Dinner at the Hotel

The walk had taken about 45 minutes in total. Our dinner tonight was at the hotel restaurant, but the table we’d booked wasn’t until 7:45, so this seemed like a good opportunity to open the bottle of Sikinos wine I’d purchased from Manalis Winery during my stay. Between the three of us, it didn’t last long, but it was tasty, with an easy-drinking flavour and went down very nicely.

We sat chatting on my parent’s balcony watching the sunset across the bay. By the time we’d finished the wine, we were ready to head downstairs to our table for dinner. It was later than we’d usually eat so we were pretty hungry and excited to have something other than Italian food for a change!

I chose the filet steak with a spicy sauce, which was absolutely delicious, while Mum had shrimp saganaki and Dad chose a chicken dish. For dessert, Mum and I both had the chocolate mousse that I’d tried on my first visit a few days ago, while Dad had one of his favourites: tiramisu! 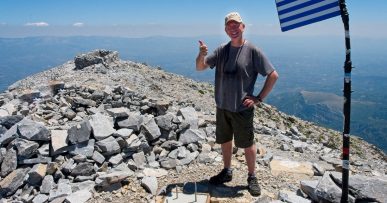 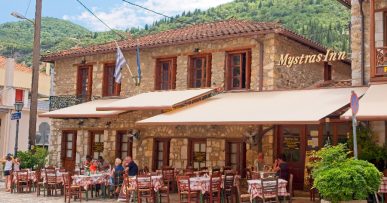