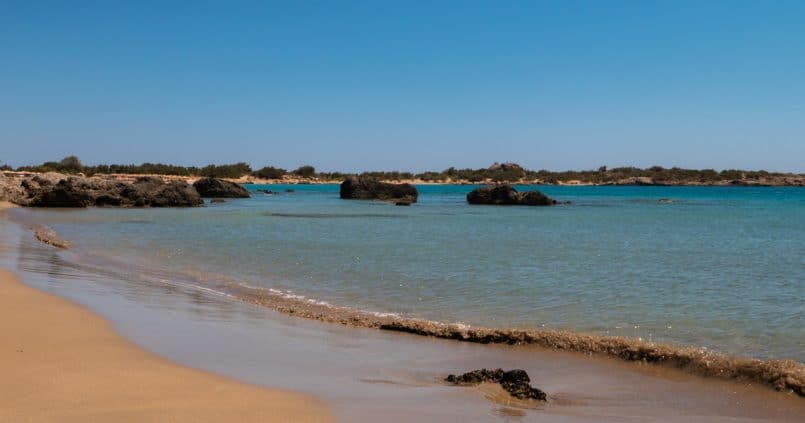 More Sunbathing in the Breeze

We decided on another beach day after our sightseeing expedition yesterday. It was still fairly windy, though not quite as strong as it has been, so we avoided Palaiochora beach and again opted for nearby Grammeno instead.

At lunchtime, I was keen to avoid Choumaz having had a bad experience there on our first visit. The only nearby alternative was the taverna at Grammeno camping, a short walk around the beach from our sunbed spot. The food was nothing special, but edible and reasonably priced. I had a cheese & onion toastie and a beer.

By mid-afternoon we’d had enough sun for the day, so we drove back to the hotel and, after a short rest break, walked to a nearby cafe/bakery called Vakakis for a coffee and, in my case, giant waffle! It was delicious, though I wasn’t sure how I would manage an evening meal after consuming so many calories – the tough decision of being on holiday!!

As it turned out, I probably should have skipped dinner. We ate at a taverna called Parasties, and while the food was tasty, Dad and I both ordered the chicken schnitzel and it turned out to be a massive portion, to the degree that we barely got through half of the chicken and felt rather guilty at leaving so much on the plate.

Somehow, England had qualified for the cup final. We narrowly beat Denmark 2-1 after extra time on Wednesday we had arrived in Greece. The final was against Italy, one of the favourite teams to win the tournament, and none of us felt England had played particularly well in any recent match, so hopes were not high.

Regardless, we found a bar just off the bottom end of the main beach and sat down to watch the game. Amazingly, we managed to score in the first 2 minutes of the match, but from that point onwards seemed to be on the back foot and couldn’t secure another goal. Inevitably, Italy equalised on the 67th minute and the game went into extra time and then to penalties when neither side could break the deadlock. Our record on penalty shootouts is hardly stellar, so it wasn’t much of a surprise when we ultimately lost the match. Lucky I’m not a big football fan so it was all academic to me.