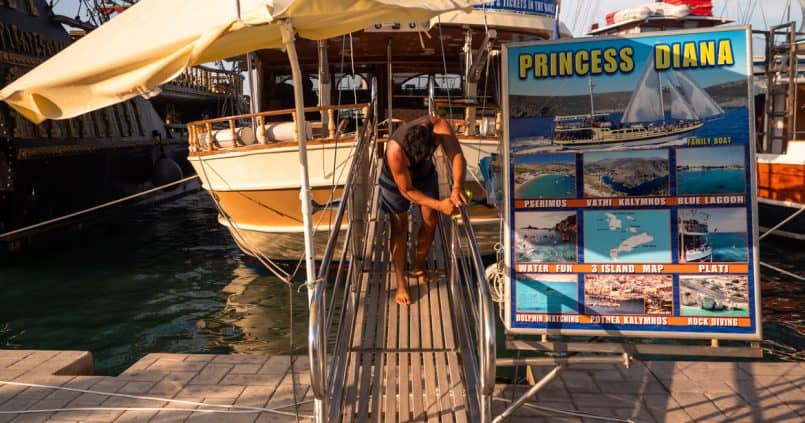 After another excellent night’s sleep in my deluxe-room bed, I once again sat outside on the veranda to enjoy my breakfast at Hotel Sonia. I haven’t mentioned it for a while, but the weather here in Greece is still exceptionally hot at the moment, with daytime high temperatures close to 40 degrees Celsius and nighttime lows barely dipping under 30.

Aside from the high temperatures making walking around during the day rather uncomfortable, there has also been a spate of forest fires across Greece and neighbouring Turkey close to the Greek coastline. One such fire broke out on Kos yesterday, though fortunately, it was quite small and quickly dealt with. However, it apparently damaged some power lines and as a result, we’ve been having rolling power outages in Kos Town in order to redistribute power while the lines are fixed.

Though my friend Ed is arriving today, his ferry isn’t due until 7 pm so I still have most of the day to occupy myself. I decided to return to the gym for another workout, having just about recovered from Monday’s by now! Today’s workout was made even more challenging due to the power being out for most of the time, so instead of weak air conditioning we had none at all and not even any music to listen to either! I managed about 45 minutes again before running out of water, then making my escape down to the beach and into the sea.

Much like yesterday, I returned to the hotel mid-afternoon to sort out my hotel room situation. Unlike yesterday, it actually happened today and my bags had been taken to a downstairs room just down the hall from reception. It was an internal room so only had a small window towards the veranda at the rear and wasn’t a patch on the deluxe room, but was nice enough and still a giant step up from Captain’s!

I spent another couple of hours chilling out until 6:30 pm, at which point I got dressed and strolled down to the ferry port to meet Ed. It was good to have some company again after 21 days of solo travelling since I left my parents in Crete, and I was looking forward to the next few days.

Ahead of Ed’s arrival, we had discussed taking a boat trip either tomorrow or Friday, so as we walked towards the hotel past the marina, we browsed several of the day trip boats before settling on one called Princess Diana. Most boats offer basically the same excursion: a three-island itinerary of Pserimos, Kalymnos and Plati. Ours cost €20 each including food at lunchtime, so seemed reasonable value. We booked it for tomorrow so that we’d have Friday free to explore Kos.

I’d managed to negotiate a room for Ed at Hotel Sonia so we could be based at the same location. He had to pay extra for a deluxe room as that’s all they had available, but I don’t think he minded once he saw it! After getting Ed checked in and giving him some time for a shower, we met up again and set off in search of dinner.

You probably won’t be surprised to discover that I took him to…yes, MamaRosa! I know he likes pizza (as long as it’s vegetarian) so it seemed a safe choice and I was keen to get his opinion on their food. As expected, we both had fantastic meals and he agreed it was an excellent choice.

Making the most of having company, we tried to make a night of it by going out for some cocktails and ended up at a fairly posh bar called Sitar, located just behind the marina. It’s a very popular spot with lots of other bars and cafes all around. We managed a few drinks each before the long day finally caught up with Ed – he’d been awake since 4 am UK time – and we had an early-ish start for our boat trip the next day, so by 11 pm we were heading back to the hotel.