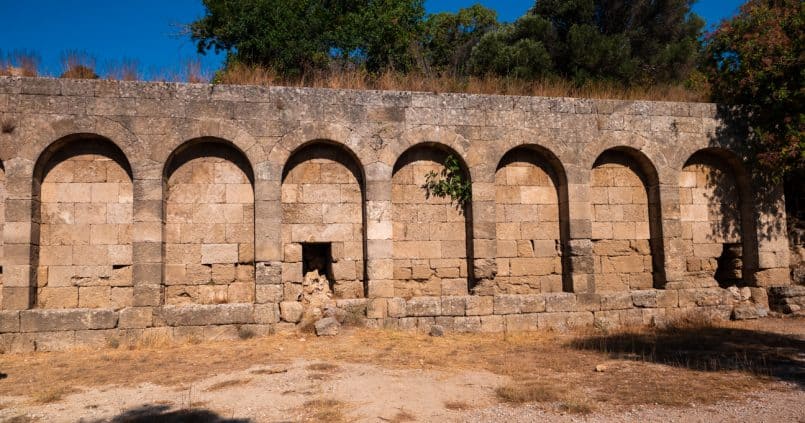 Taking in the Sights

I woke just after 7 am after a great night’s sleep – the beds at Hotel Lydia are a lot more comfortable than the ones on Karpathos. Before breakfast, I got my laptop out and planned my itinerary for the day. I decided to start off by heading west to the ancient stadium, acropolis and odeon to see them before it gets too hot. I’ll then go east into the Old Town part and see the sights there, including the museum and the Palace of the Grand Master.

Breakfast was a good improvement over Iolkos Hotel on Karpathos, though still not fantastic. By 8 am, I was leaving the hotel and on my way west. The walk took about 20 minutes at my usual brisk pace. The ancient sights are free to access and, aside from a small bus tour group, I was the only person there at that time of the morning.

The sights were more impressive than I expected, with the stadium and Odeon, in particular, being in good condition. It’s fun to imagine what the place might have been like during ancient Greek times.

After spending 30-40 minutes exploring the ruins, I began the walk back east towards the Old Town. On the way, I stopped for some water and a Coke Zero at a cafe. The temperatures in Greece were still pretty high, up into the late 30’s Celsius, so I wanted to stay hydrated while out and about.

The walk to the western entrance of Old Town (Gate D’Amboise) takes about 15 minutes from the ancient stadium. The Old Town walls are some of the most impressive battlements I’ve seen and look incredibly cool when you first approach them.

Once inside the gate, I spent some time just walking through the streets of the Old Town. Sadly, a lot of them are ruined by cheap tourist stalls selling tatty goods, but if you can look past that then it’s a pretty nice area to spend time. I walked all the way to the Sea Gate on the opposite side and spotted the Rhodes Museum of Ancient Greek Technology. This turned out to be a great little museum where, for €5, I enjoyed a personal guided tour of the exhibits, most of which are working scale models of the inventions they demonstrate. It only takes about 20 minutes to see all of them, but I highly recommend it if you’re at all interested in mechanical technology.

From there, I went back inside the Old Town gates and straight to another museum, this time the archaeological museum. For €10, I got a combined entry ticket which also gives me access to the Palace of the Grand Master that I planned to visit later anyway. The museum is nice, though having visited many Greek museums over the years, it does get hard to appreciate all of the items on display unless you have a real fascination for ancient pottery or jewellery etc.

By this point, it was time for some lunch. There are plenty of tavernas inside the Old Town and it was hard to choose which one to try, so in the end, I just sat down somewhere at a table with good shade from a large tree. I had a Greek Salad, tzatziki and some garlic bread which was fairly good.

By now, you’ll know I don’t like to overdo the activity when I’m on holiday, so instead of visiting the Palace of the Grand Master as I’d originally planned, I decided to go back to the hotel to chill out for a couple of hours and then return to the Old Town late afternoon to see the palace before dinner. I probably wouldn’t have done this if the hotel was further away, but it’s only a 10-minute walk from the west gate so it seemed like a reasonable decision to escape the heat for a while.

Palace of the Grand Master

After a cool shower and a brief nap, I got dressed and headed out again just after 6 pm. It was still pretty hot, but I felt refreshed and knew it would start cooling off fairly soon. I walked back to the Old Town and, after a bit of trouble finding the entrance, made it inside the Palace of the Grand Master of the Knights of Rhodes (to give it its full title). Although I know it’s been heavily restored over the years, it’s still a very cool building as it looks like a proper castle:

I had a great time walking around the palace, there are lots of rooms to see with an array of statues, mosaics, furniture and other exhibits.

After exploring all the rooms at the palace, I headed north out of the Old Town in search of dinner. Actually, I’d done some research on Google Maps and TripAdvisor to find somewhere nearby, my choice being a pizza place called Pizza Street 99. As you can probably tell from the name, it’s less of a restaurant and more a street food vendor, but there are tables set up outside and the pizza was delicious and pretty cheap too.

I had another gentle stroll through Rhodes Town on my way back to the hotel, again being pleasantly surprised at how nice the atmosphere was. Part of me had expected to hate Rhodes Town for how busy and over-modern it might be, but it was nice to be in a vibrant atmosphere after the last week or so of quiet resorts.