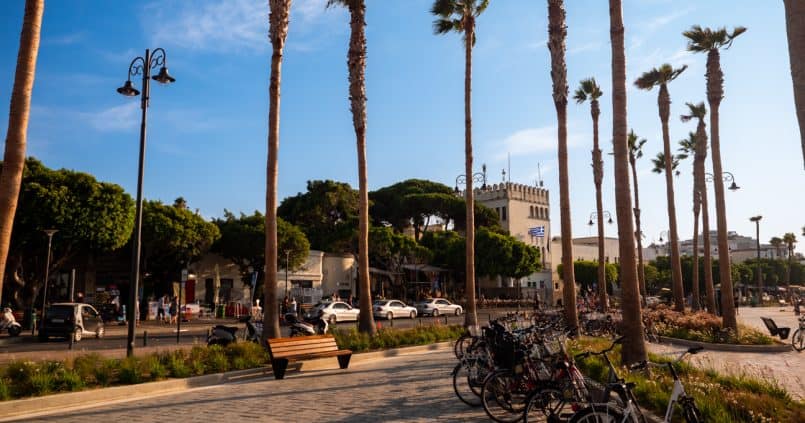 Having decided to return to Kos Town for the remainder of my time on the island, I had my last breakfast at Chrysoula Apartments in Kefalos and planned out my day ahead. I had two choices for the bus back to the capital: either 10:30 or 15:00. As I wouldn’t be able to get into my room at Hotel Sonia until at least 14:00, the early bus made little sense and so I opted for the later time.

This did mean asking at the pool bar whether I could stay in my current room beyond the normal 11:00 check-out time. I was told it should be fine, but to check back a bit later to confirm. This was a little awkward as I would have to pack most of my things in case they said no, but as it turned out I was able to stay until 14:00. The bus stop was only a few metres up the main road, so I left the pool bar at 14:45, having sat in the shade with my luggage as long as possible.

The bus itself was slightly late arriving, but it turned up about 10 minutes behind schedule and then I was sat comfortably as we journeyed back across the island towards Kos Town.

Back at Hotel Sonia

As I wheeled my suitcase back along the streets of Kos Town towards Hotel Sonia, I felt glad to be back despite a restful few days in Kefalos. After checking back into room 12, I showered and unpacked a few things, then chilled in the room until it was time to head out for dinner.

The last few days had been pretty average in terms of food, so I was excited to have a wide array of restaurants at my doorstep again. There was no question of where I was going first though: MamaRosa!! Having tried all of the dishes that I liked the sound of, I returned to my favourite and ordered the mushroom tortelloni, this time with garlic bread to start. I’m not sure it was quite as good as the first time, but perhaps my expectations were just higher. Either way, it was delicious.

I had considered staying out for a drink or two to celebrate my return to Kos Town, but the bus ride had made me feel a little queasy (I suffer from travel sickness occasionally), so I ended up going straight back to the hotel for an early night instead.