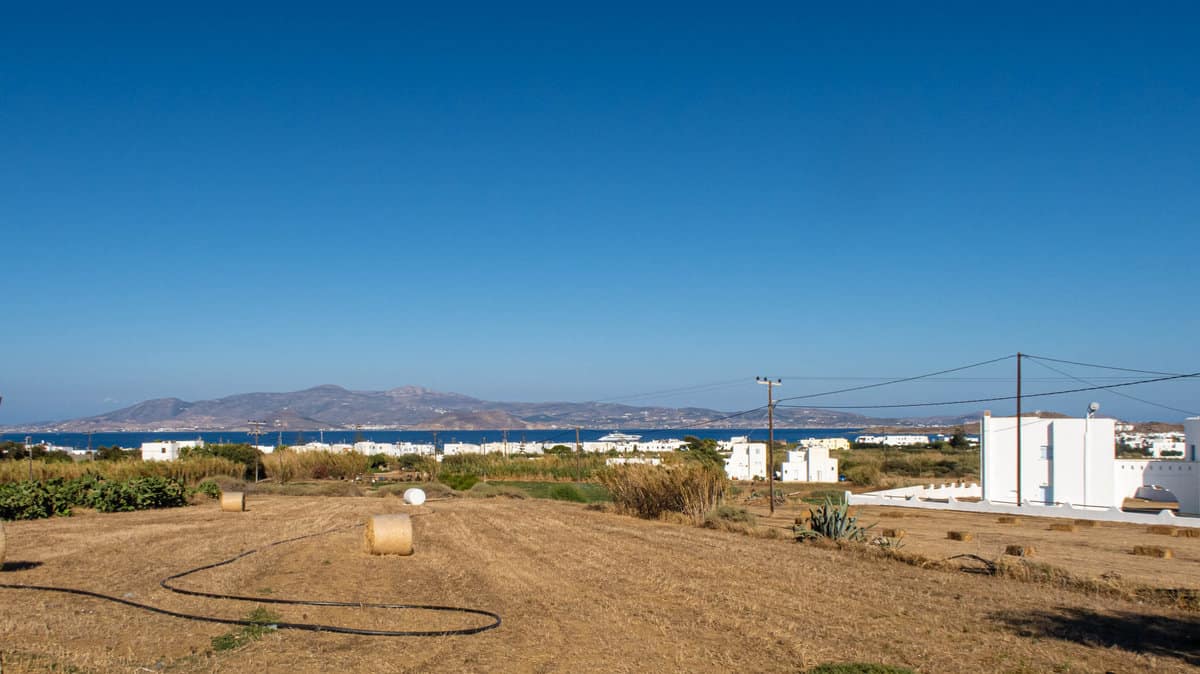 Last day today. I knew it was going to be a long one with lots of travelling – my flight back from Mykonos didn’t depart until 9 pm, it would be early Thursday morning by the time I got back home.

As a result, I slept in a bit (if you can call 8:30 am sleeping in). I decided to try the free breakfast again as I didn’t fancy the walk into town just for food. This time it was actually much better, so I managed to eat enough to keep me going until lunchtime.

Figuring I could delay packing for a couple more hours, I headed out to the pool to top up my tan for the last time. I’d managed to secure a slightly late check-out, so I had my room until midday instead of 11 am. After soaking up all the rays I possibly could, I went back to the room to shower and get my things together. I hadn’t fully unpacked anyway, so it didn’t take long and by 12 I was sat back at the pool bar under the shade.

A little while later, the owner turned up and I was able to get a lift back to Naxos Town, arriving just before 1 pm. My ferry wasn’t until mid-afternoon but having stayed outside the main town, I hadn’t been able to get my ticket in advance so I wanted to arrive in plenty of time. Once I had my ticket, I sat in a cafe next to the ticket office and had my last pre-ferry beer of the holiday.

The ferry arrived on time, as usual, and just 75 minutes later I was back on Mykonos. It didn’t seem like any time had passed since Ed and I boarded the Naxos ferry, but it had been over a week since we left.

I was a little apprehensive as I wasn’t sure how easy it would be getting a bus to the airport, though I had plenty of time to spare. Sure enough, there was a bus waiting at the port which went to the airport via Mykonos Town. I managed to get a seat near the front, and it was quite an experience – the roads were very busy into the main town, and the bus was squeezing through the smallest of gaps, while all the time pedestrians were trying to get down both sides of the roads. Not an experience I’ll look forward to repeating.

The bus stop in Mykonos Town was heaving with people, but we got turned around and, after dropping some people off and picking up a few more, we were on the way to the airport. Even though I knew Mykonos was a small island, I was expecting it to take longer but it’s literally 5 minutes away, even in traffic.

At the airport, it was pretty busy as I’d imagined it would be, but I got checked in and through security fairly quickly. I grabbed some water and a snack from the small shop just inside the departure lounge, then somehow managed to grab a seat despite lots of people sitting on the floor. Grabbing my headphones, I sat reading my Kindle until my flight was called, then began the arduous process of boarding the plane.

When travelling alone, I often choose an aisle seat so I have a bit more legroom, but this time I had reserved a window seat close to the front. Fortunately, the person sitting next to me wasn’t huge (my biggest fear when solo flying!) and I was able to nap for an hour or two.

It was close to 11:30 pm by the time I’d retrieved my bag and left the terminal building. It was pretty cold compared to the weather in Greece, but I had prepared for that by packing a long sleeved shirt in my rucksack. I walked back to the Courtyard Marriott hotel where I had left my car, got the keys back from reception and was soon on my way back to good old Norfolk.

I made the journey in good time as there was hardly any traffic on the roads at that late hour. When I got back to my flat, I dumped my luggage in the lounge and went straight to bed, falling asleep almost immediately.

It had been a great holiday though, and I was already thinking about my next trip…