Our early Gatwick flight was an hour late departing due to air traffic restrictions over Greece, so not the ideal start to the trip. Luckily a tailwind most of the way helped reduce this and we arrived only 25 minutes after our scheduled time. While I waited for my luggage to arrive at baggage reclaim, Ed (having only hand luggage) went ahead to scope out our bus and taxi options for getting to the hotel. Ed was waiting in the taxi line as I made it outside, and we were faced with the prospect of a further delay. To our good fortune, however, we were soon approached by a local man who asked if we wanted to hop in his car and he would take us to our hotel. This turned out to be basically an unofficial (i.e. unlicensed) taxi, but as it was a short journey and he quoted us 5€ less than the taxi company, we decided it was worth a shot!

Traffic was pretty terrible, as we’ve come to expect on Mykonos – the roads are too narrow, and the popularity of the island means there are just too many tourists for most of the summer months. It really isn’t a great experience, and we were glad to be staying just one night before heading to Naxos. We made it to the hotel just as check in opened at 2 pm, so there was a small queue, but after 5 or 10 minutes we both had our room keys and were excited to get our bags dropped off and the holiday started.

Unfortunately for me, this turned out to be slightly more problematic than for Ed, whose room was just behind reception in the next block. The hotel is set on a fairly steep hill, so the further back your room, the more steps you have to climb to find it. As we were both too impatient to wait for the porter to carry our luggage, I didn’t know exactly where my room was and had to set off up the many steps in search of the correct block. Soon sweating profusely, I dragged my suitcase further and further up the side of the hill, checking block after block with no success. Eventually, I reached a block where the room numbers were higher than mine, so, realising I must have passed the correct block somehow, I stopped for a rest and to see if I could spot a set of rooms I must have missed on the way up. One of the Greek cleaning ladies must have noticed my confusion but didn’t seem to speak much English. I said to her, “184?” in a questioning voice, to which she replied by pointing behind her and down. I smiled, waved my thanks and set off in the direction she had indicated but was soon lost again as I couldn’t see any rooms where she had pointed. I turned to find that she had followed my progress from the balcony of the block she was cleaning and continued to point downwards and to the left. Eventually, I realised that what I had thought were all two-storey blocks actually had a third floor at basement level, and my room was one of these in a block I had already checked. Finding the stairs down to the entrance, the door to 184 finally greeted me. Stepping inside the cool, dark room, I threw my case down on the bed and hurriedly stripped down to my underwear with a glorious sigh of relief!

After a long cold shower, I dressed in some clean clothes and walked down to the bar just opposite reception, where I found Ed waiting for me with a cool beer at the ready. I had brought my drone with me, so after a brief rest to enjoy our drinks and the nice views, I walked back up the road towards the ferry port in search of a good spot to get some aerial footage. Ed wanted to explore the bay around Agios Stefanos so he set off in the opposite direction and we agreed to meet back at reception a little while later.

Getting the drone airborne for the first time on holiday was a bit nerve-wracking: a combined fear of crashing it or being told off for using it meant I wanted to find a good quiet location where I couldn’t easily be seen, but that had good visibility of the port and bay. Fortunately, there was just such a spot a few hundred metres from the hotel, on a dirt path that dropped downhill off the main road. It was a tad windy, and on several occasions, the drone warned me that the high wind was making conditions potentially dangerous, so I only flew it for about 15 minutes but did manage to record a couple of short videos and take some decent photos as well: 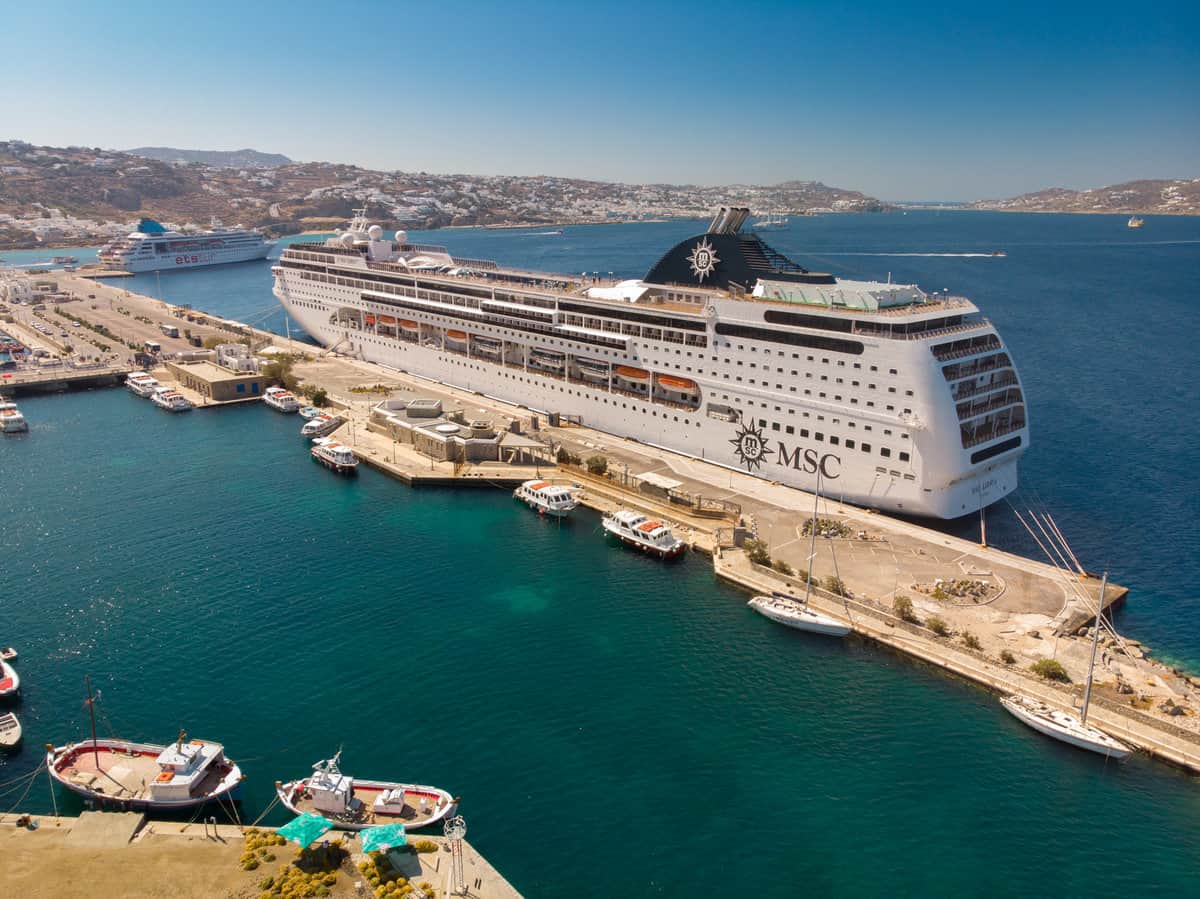 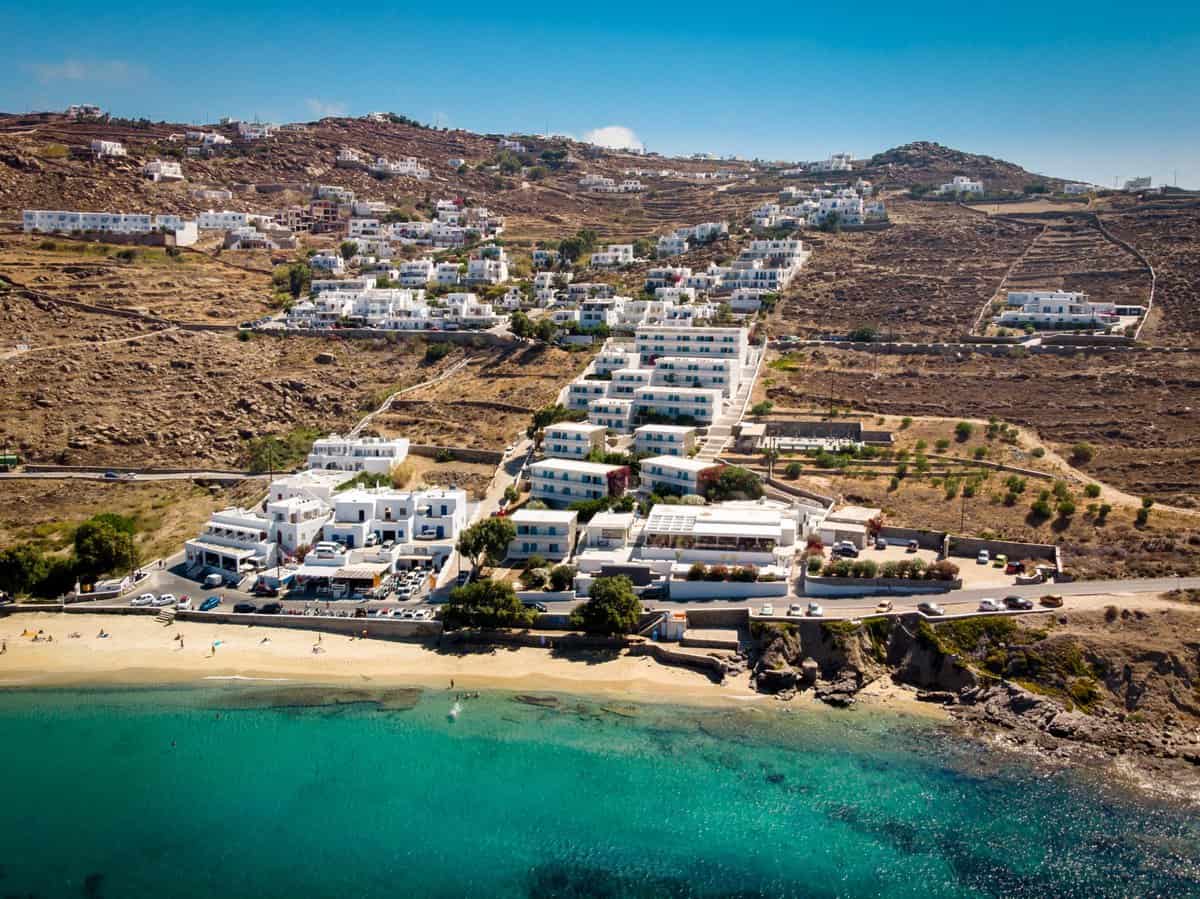 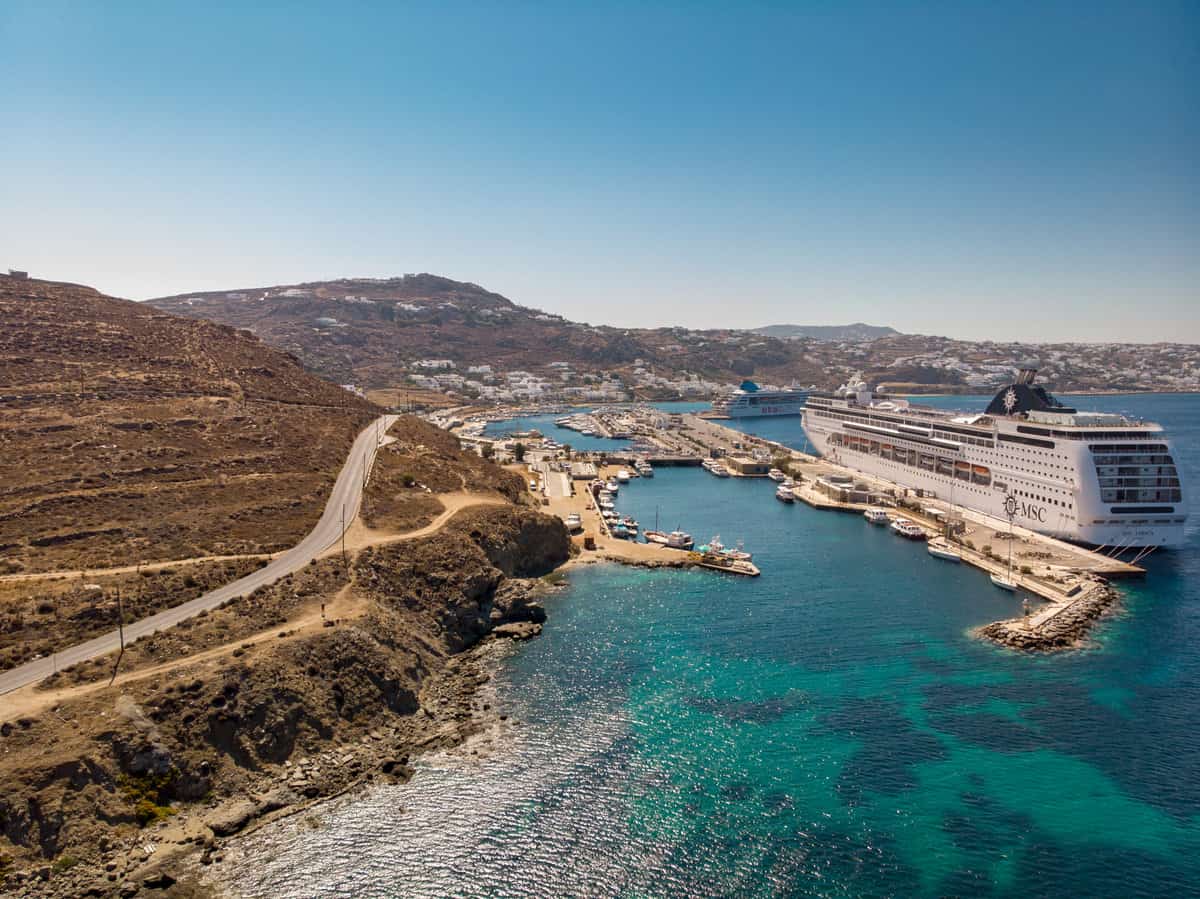 It was quite windy and I didn’t want to tempt fate (or get into trouble), so I packed the drone away after 10 minutes, glad of a successful maiden voyage and excited to review the photos and video as soon as I got the chance. By the time I’d packed up and walked back to the hotel, Ed was waiting in the bar so I joined him for a nice cool beer and a relaxing sit down before we headed into Mykonos Town and (hopefully) onto Delos.

Getting to Mykonos town involved a short walk from the hotel to the main ferry port, where the SeaBus service operates a short boat ride across the bay to the town harbour. It arrived on schedule and provided a pleasant view of the town as we arrived: 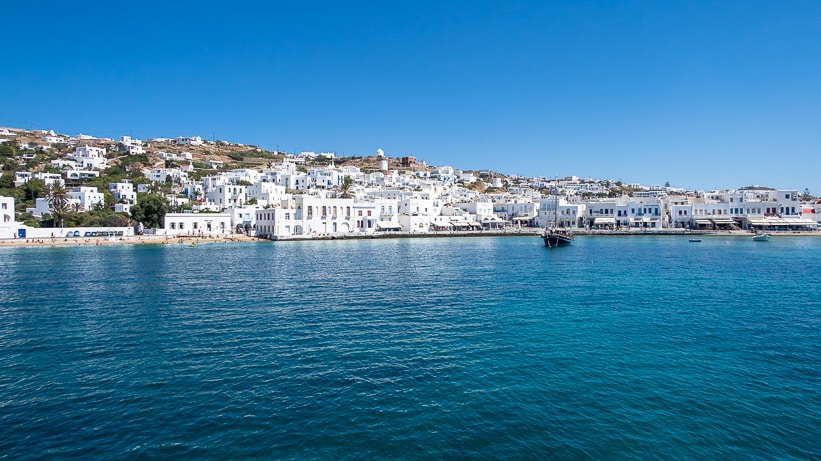 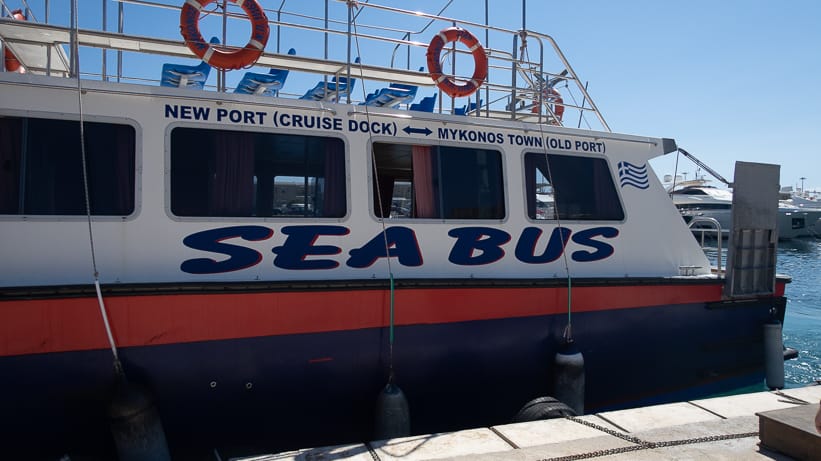 Arriving in plenty of time for the 5pm Delos tour, we bought our tickets and walked through some of the narrow streets into the town in search of a late lunch. A gyros and second beer later, we made our way back to the harbour and sat on the wall close to the boat until it was time to board. The crossing to Delos takes about 25 minutes, and there’s not an awful lot to see until the island approaches, but it’s still nice to sit under the Greek sun with the cooling breeze on your face.

Sadly the Delos tour proved rather disappointing. We had paid for the guided tour, and as part of a large group we were escorted round the main ruins close to the harbour, but with only 2 hours it felt like we missed a lot of things – such as being able to walk up the hill to see the Temple of Hercules and some of the other ruins. The guide – while trying her best – wasn’t especially fluent in English and struggled to provide a captivating narrative of the islands history, so overall we left feeling a bit regretful at having spent €50 each on the trip. I think if I went back again I would make an effort to get more time on the island and explore it myself, perhaps using a guide book to learn the history.

Not to be deterred from having a great first day, we arrived back in Mykonos town for a good meal, then some drinks at the Skandinavian Bar before catching the end of a World Cup football last-16 qualifier. We then hopped on the 11:30pm SeaBus back to the main port and a steady stroll back to the hotel. Having been awake since 3:30am UK time, and more than a few drinks to the worse, sleep came immediately.

Posted in Mini Cyclades 2018, Mykonos
Leave a comment
Will Appleby