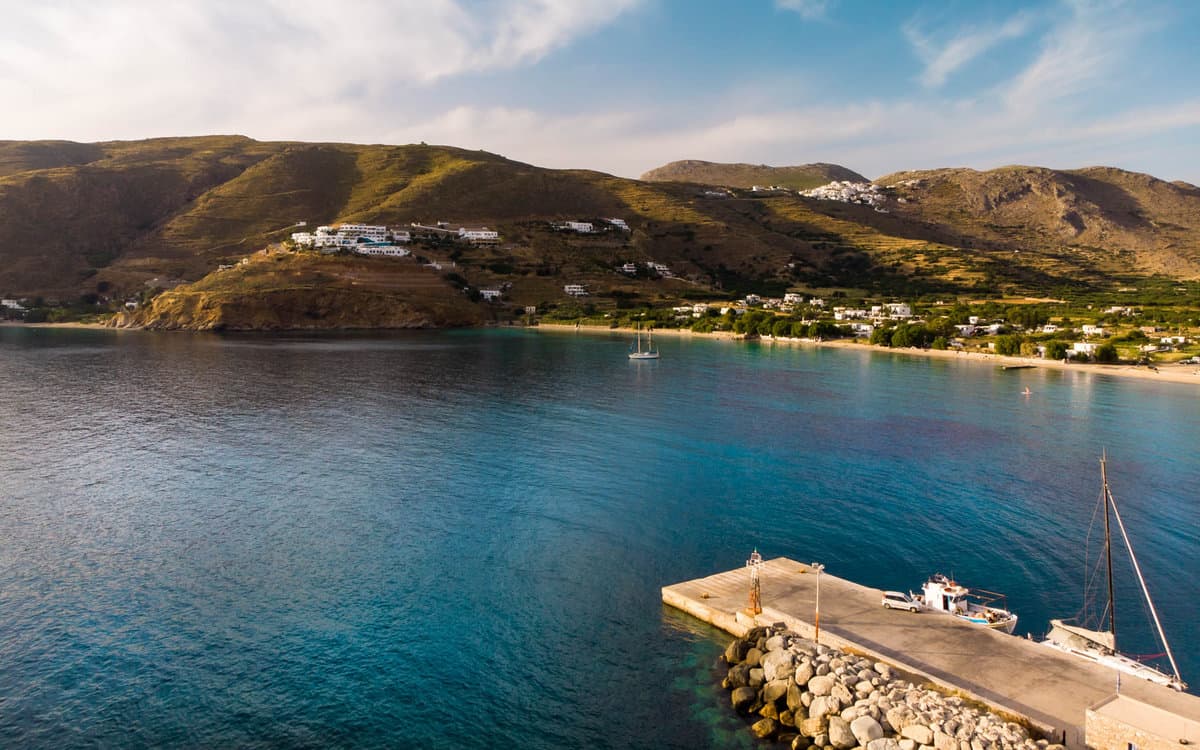 Aegiali was our base for the first 3 nights of the trip, staying at the Yperia Hotel just behind the harbour.

Despite the very late (or rather, early) arrival, we were both awake shortly after 9am, agreeing to meet downstairs for breakfast at 9:30am. The selection was modest, but all very tasty (see my hotel review for more details).

The plan for today was a modest walk around the northern end of the island, starting anti-clockwise towards Langada, onto Theologos church and then in a north-westerly heading towards Tholaria and back down to Aegiali. The first section to Langada is pretty straightforward as you can see from my Garmin data: 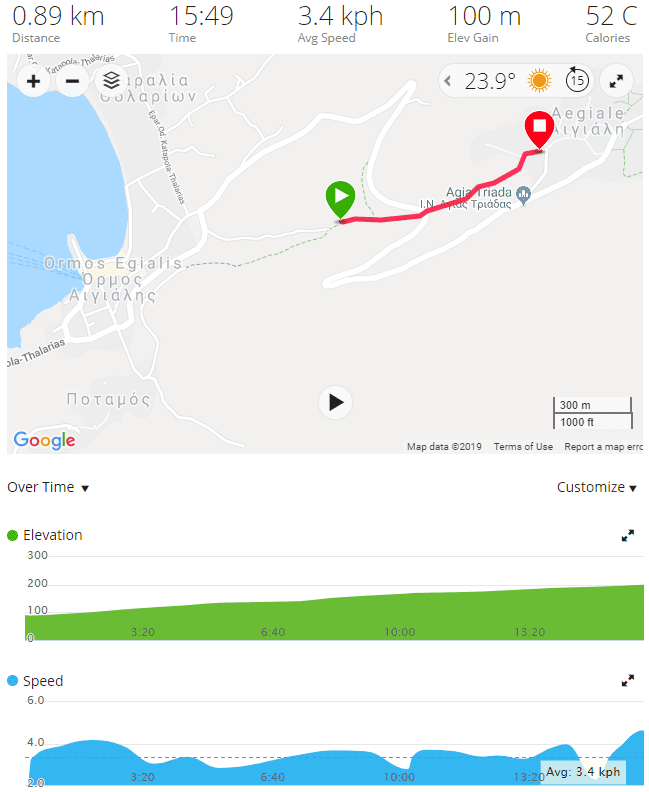 We stopped briefly so Ed could detour up to the small church of Agia Triada, nestled in the rock face at the south end of the village. I took the opportunity to break out my drone and take some aerial photos and video of the village and surrounding areas. 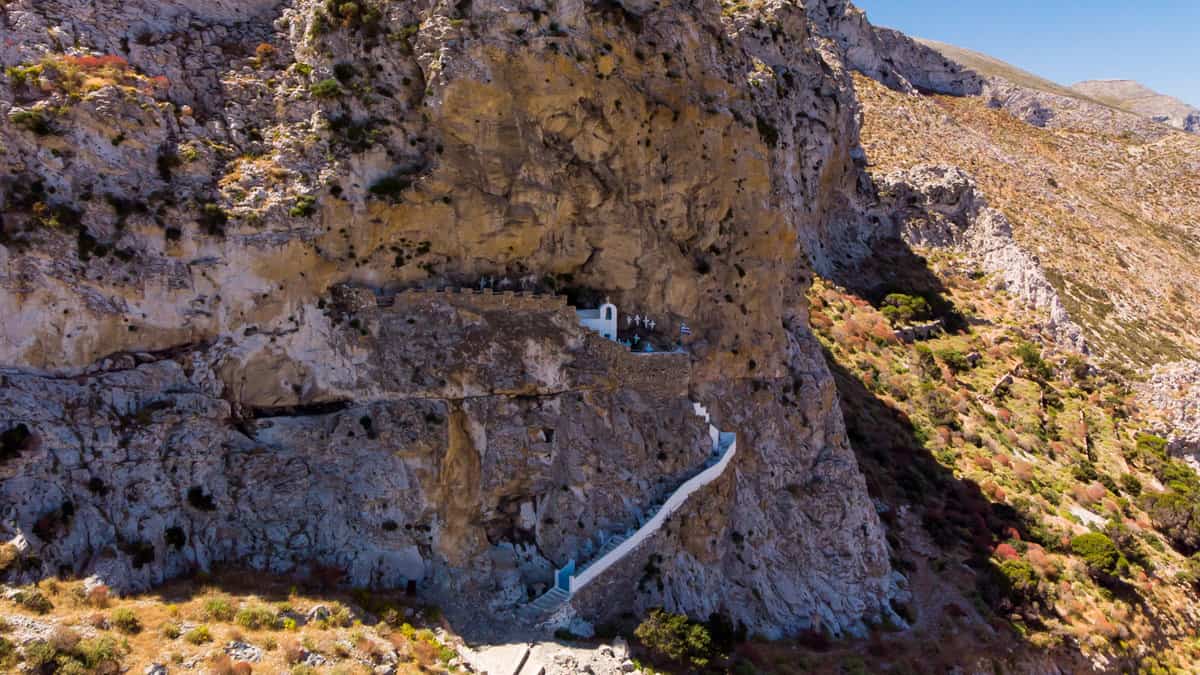 The next section was slightly more challenging, with mostly uneven dirt paths on a fairly constant incline. It took just over an hour to complete the 3.3km section, travelling at a steady pace.

It was at this point things went slightly awry… according to Ed’s map, there is a path that tracks north from Theologos, following the direction of the coastline around the north-west edge of the island, and ending up close to Tholaria. We never found this path. Instead, we spent over 2 hours scrambling down the side of some fairly steep hills, eventually giving up on reaching Tholaria and diverting back to Langada instead.

The Garmin data below doesn’t really do any justice to how tricky this was – I’ve captured the satellite image, but it’s difficult to see that there’s no path at all for the first third of the walk. We also lost too much altitude so had to climb up to Langada again at the end.

Feeling justifiably exhausted at this point – what had intended to be a gentle walk turned into nearly 9km of fairly tough hiking – we stopped at Nikos taverna for some much-needed refreshment. After ordering two large beers, we quickly realised that food was also necessary and ended up having a fairly full meal as well.

Having recovered slightly thanks to the food and alcohol, we decided against walking the rest of the way back to Aegiali even though it was mostly downhill. My knee was feeling a bit sore and we had our main walk the next day to think about. We asked the waitress if she could call us a taxi, but the owner very kindly offered us a lift instead if we could wait another 15-20 minutes for her to be ready. Naturally this presented a good opportunity for a second beer, so we willingly obliged.

We arrived back at the hotel shortly after 5pm. The pool looked very inviting in the late afternoon sun, so after a quick trip back to our rooms to drop off bags and get changed, we spent the next hour or so by the pool – a very pleasant reward for a busy day!

Seeing another opportunity to get some good ‘golden hour’ drone footage, I nipped back to my room to change and grab my gear before heading down to the port area. I found a nice quiet spot up against the harbour wall and was pretty pleased with some of the shots I took (video to follow): 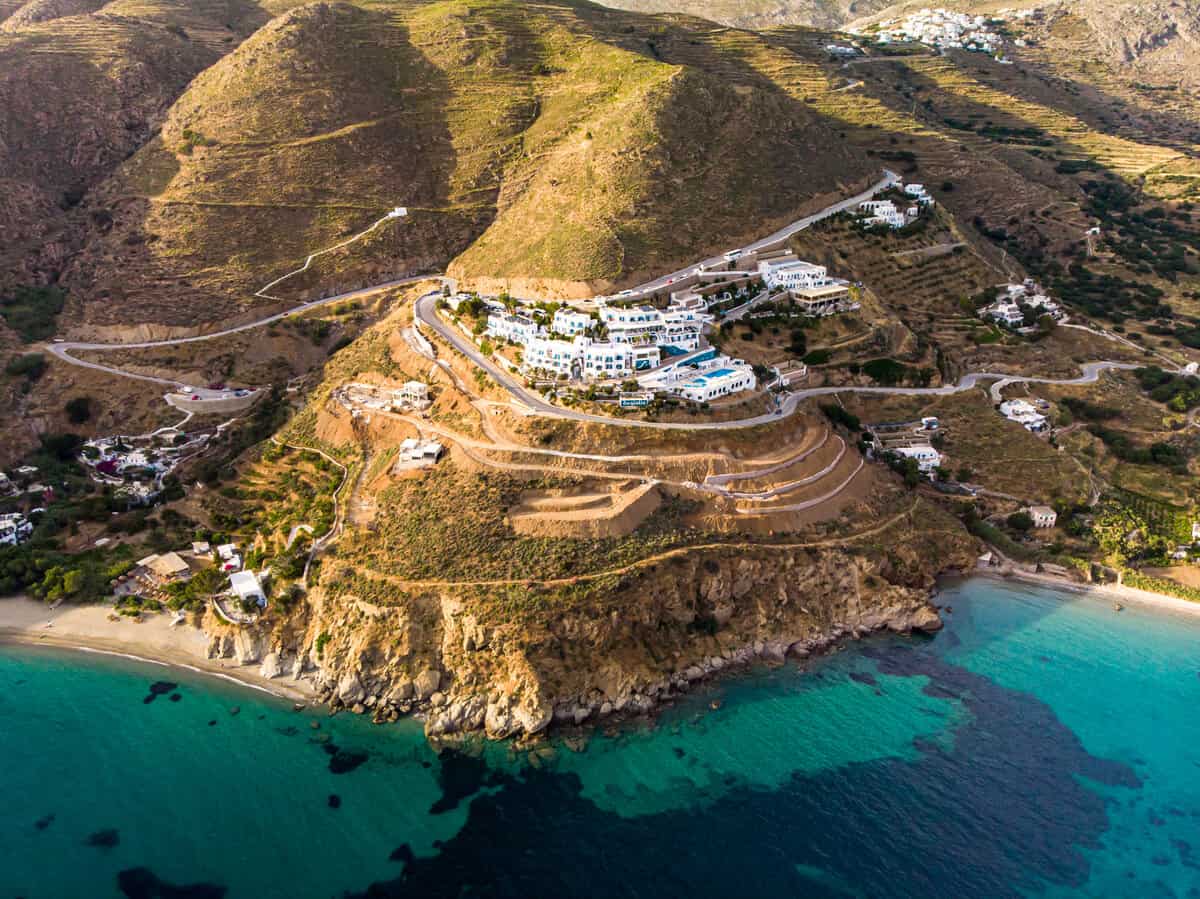 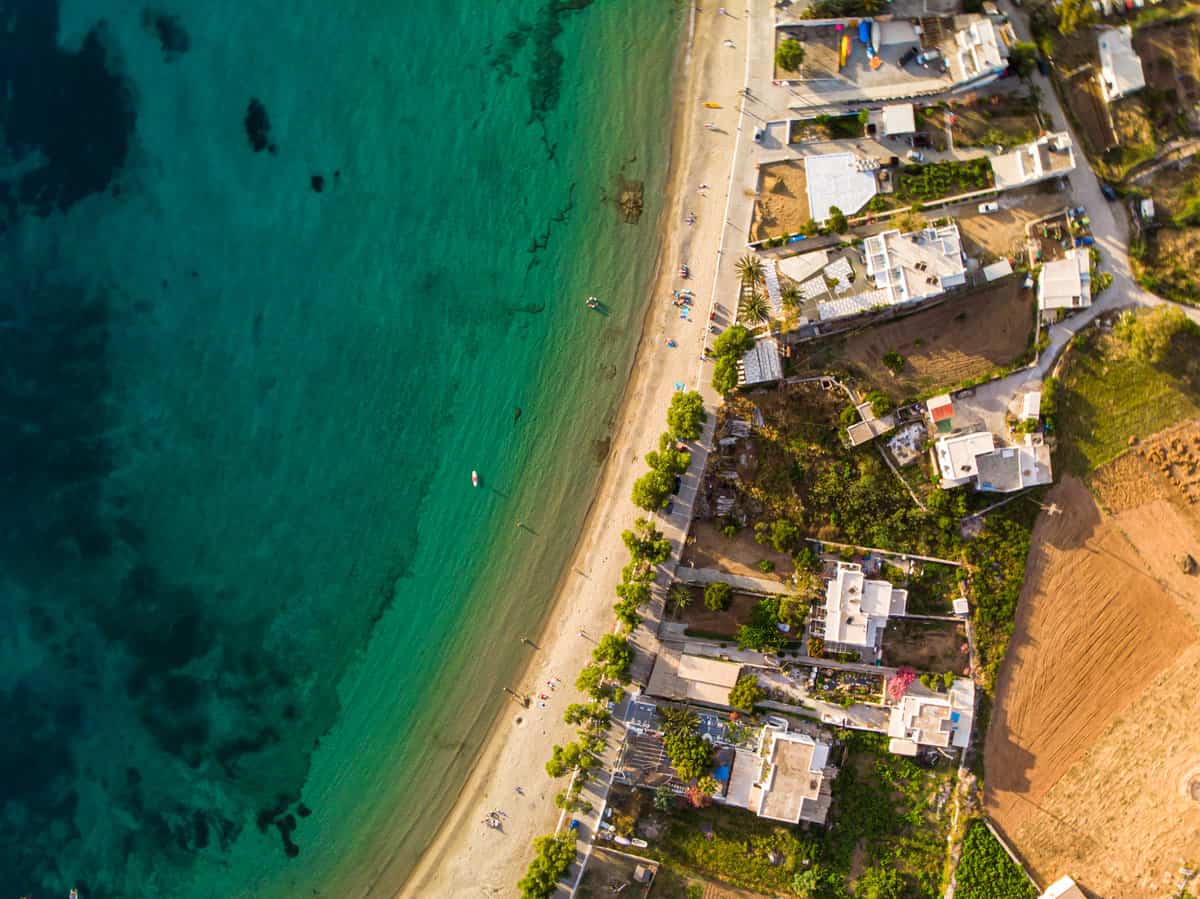 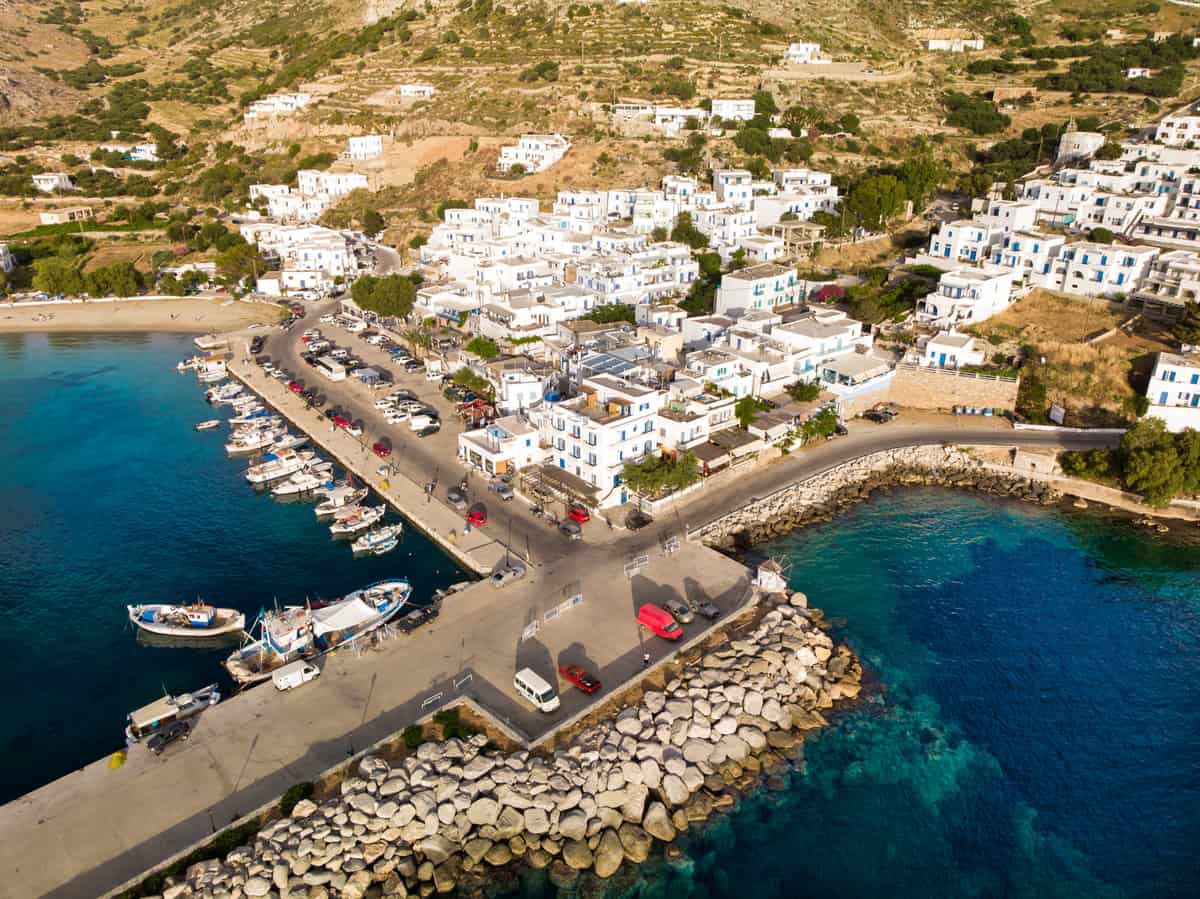 After showering and getting changed into some evening clothes, I met Ed at reception around 8pm. We decided to have a quick drink by the pool and watched the amazing sunset with an Ouzo:

We then headed into the village and, after walking along the beachfront area in search of a good taverna, ended up at To Limani not far from our hotel, as it had been highly recommended on the TripAdvisor forums. We had a good, but not amazing, meal, with decent house wine.

By 11pm we had both retired to our rooms, pretty exhausted from the day’s exertions, but looking forward to the big hike tomorrow.