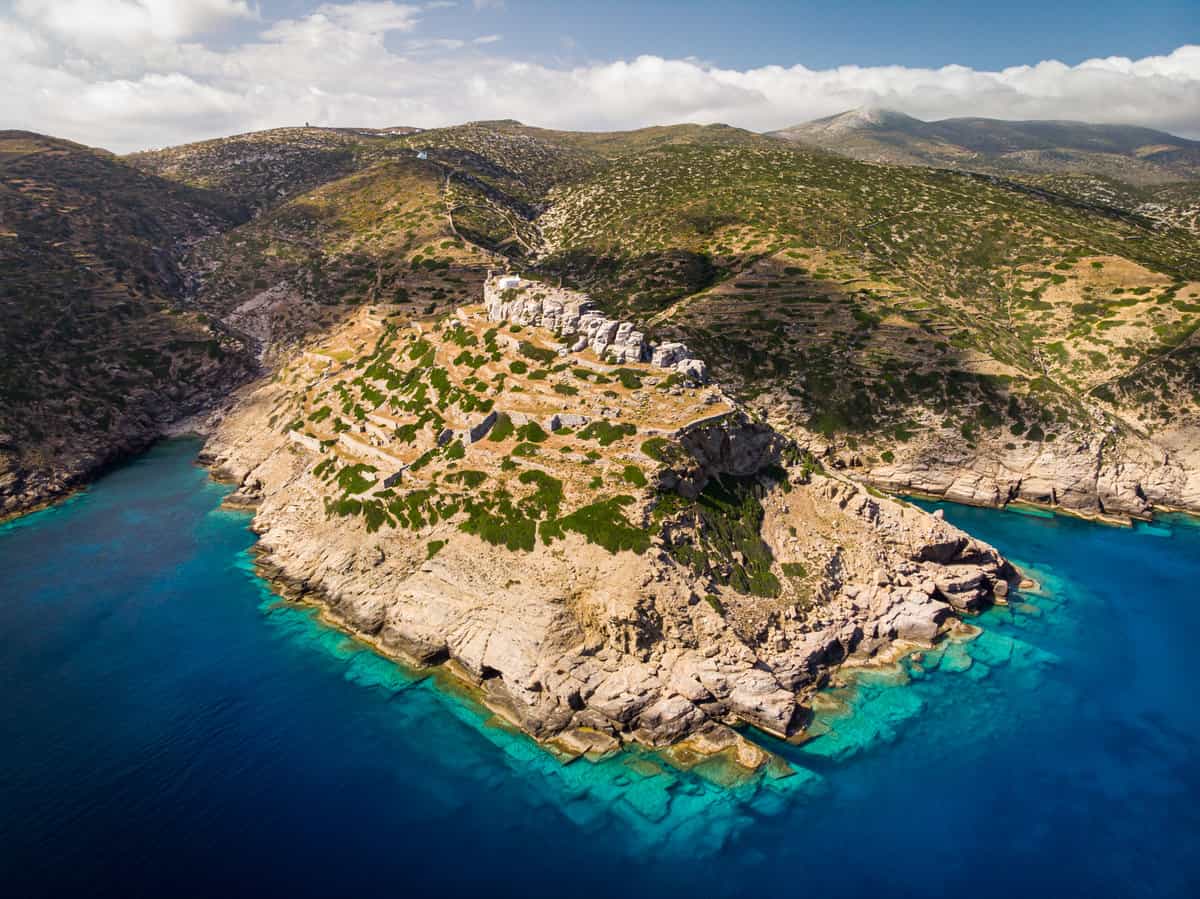 We decided to get an early start today, having been told we could collect the rental car at 8am if we wanted. Unfortunately, this meant skipping the hotel breakfast (although it wasn’t included in our room rate), as they didn’t start serving until 08:30.

Instead, we left the hotel around 07:20, and tried to find somewhere close to the rental shop to get breakfast. This turned out to be a place called “To Teleion”. Although the breakfast was nice, it was very expensive, costing us 33€ for two lots of coffee, orange juice, toast and yoghurt with honey. We left feeling slightly ripped off.

At 8, we strolled over to FM Rent a Car but the owner wasn’t quite ready for us yet. After a 15-minute delay, his assistant got the keys and walked us back towards the bus station which was also a large car park. He found our rental car and gave us a quick explanation of the controls and we were left to get started. The car was an old-ish Fiat Punto that looked like it had seen better days and didn’t have air conditioning either, but for 25€ it was good enough to get us around.

After a brief stop for petrol at the station just before Chora, we continued on south-west to our first stop at Vroutsis. We parked here to do the short hike north to Ancient Arkesini. The walk turned out to be tougher than expected, as it’s on a rough track and the first part is all downhill, then uphill again as you approach the ruins.

It was well worth the effort though, as the ruins themselves are stunning. I got the drone out and took some good photos: 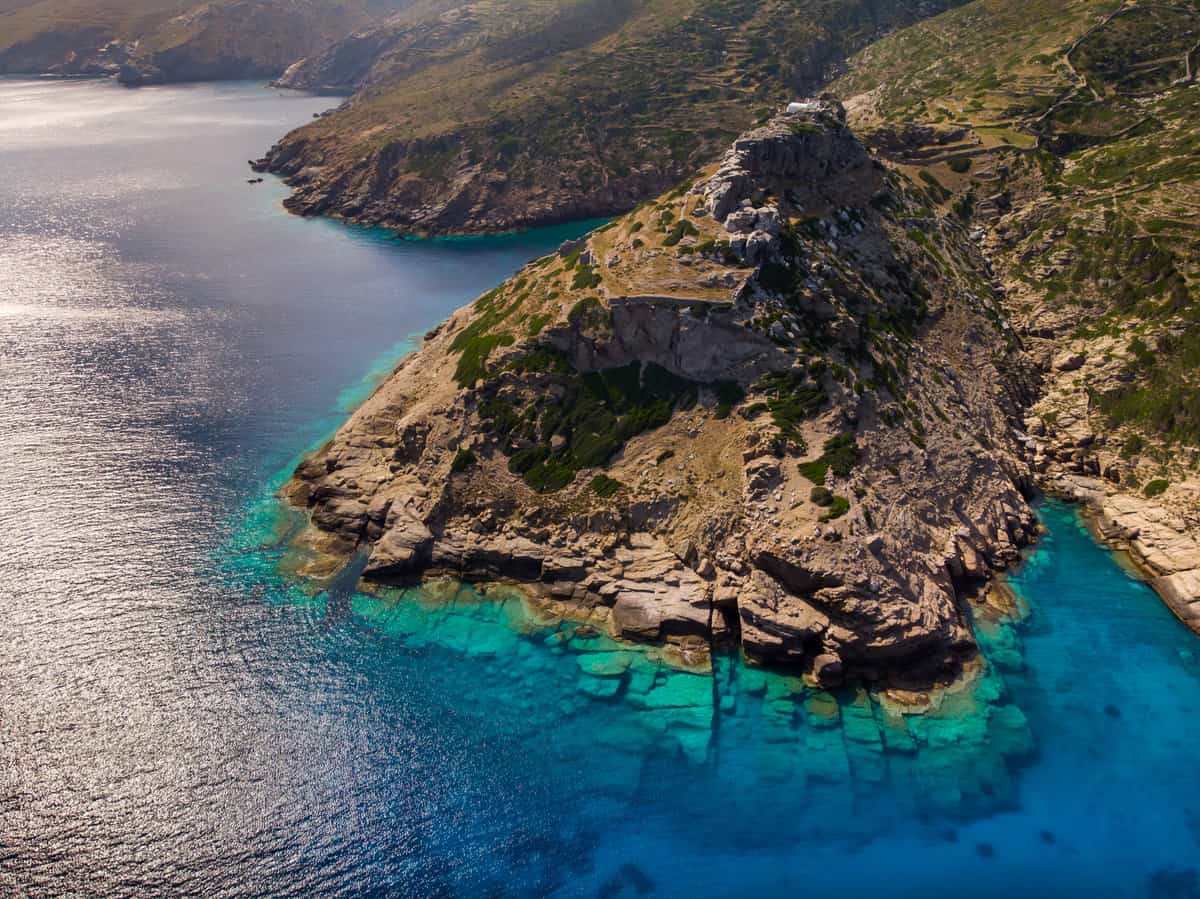 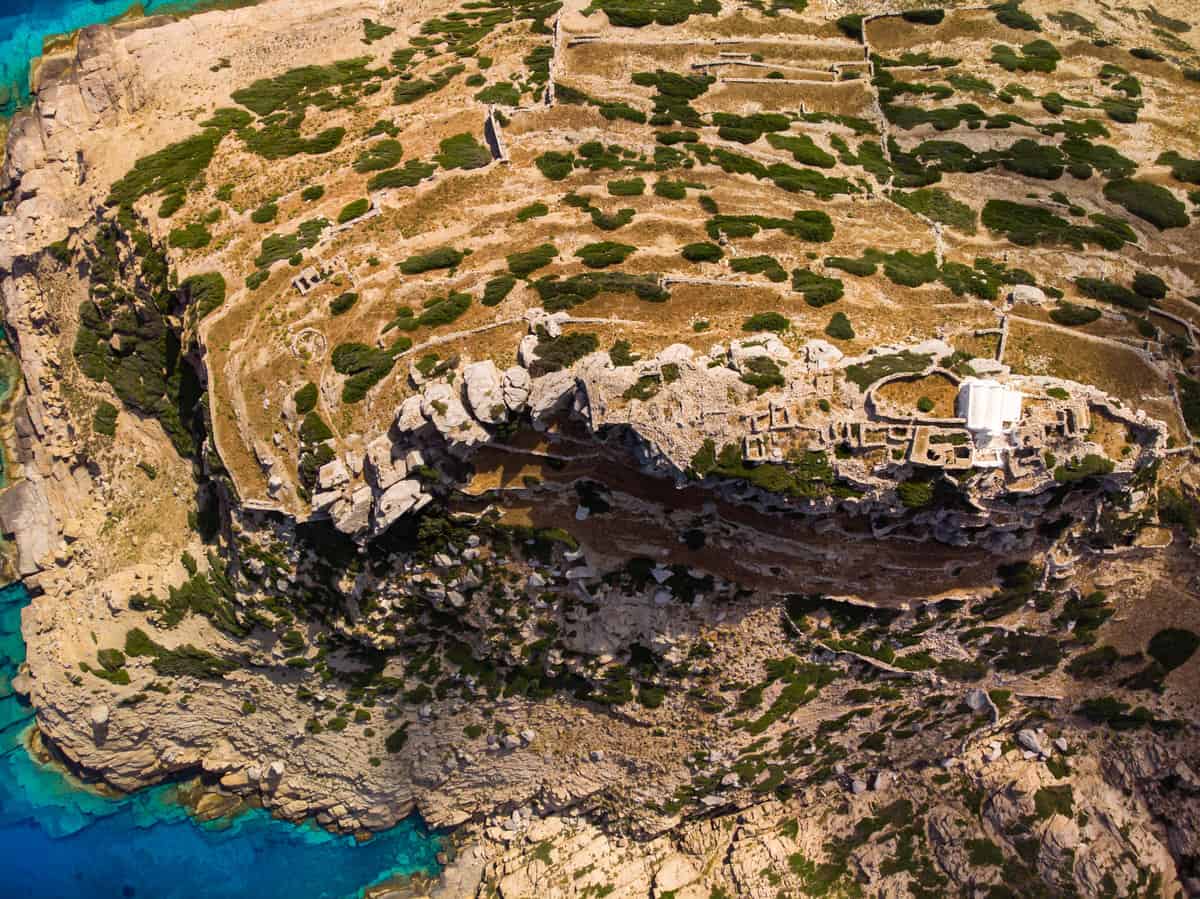 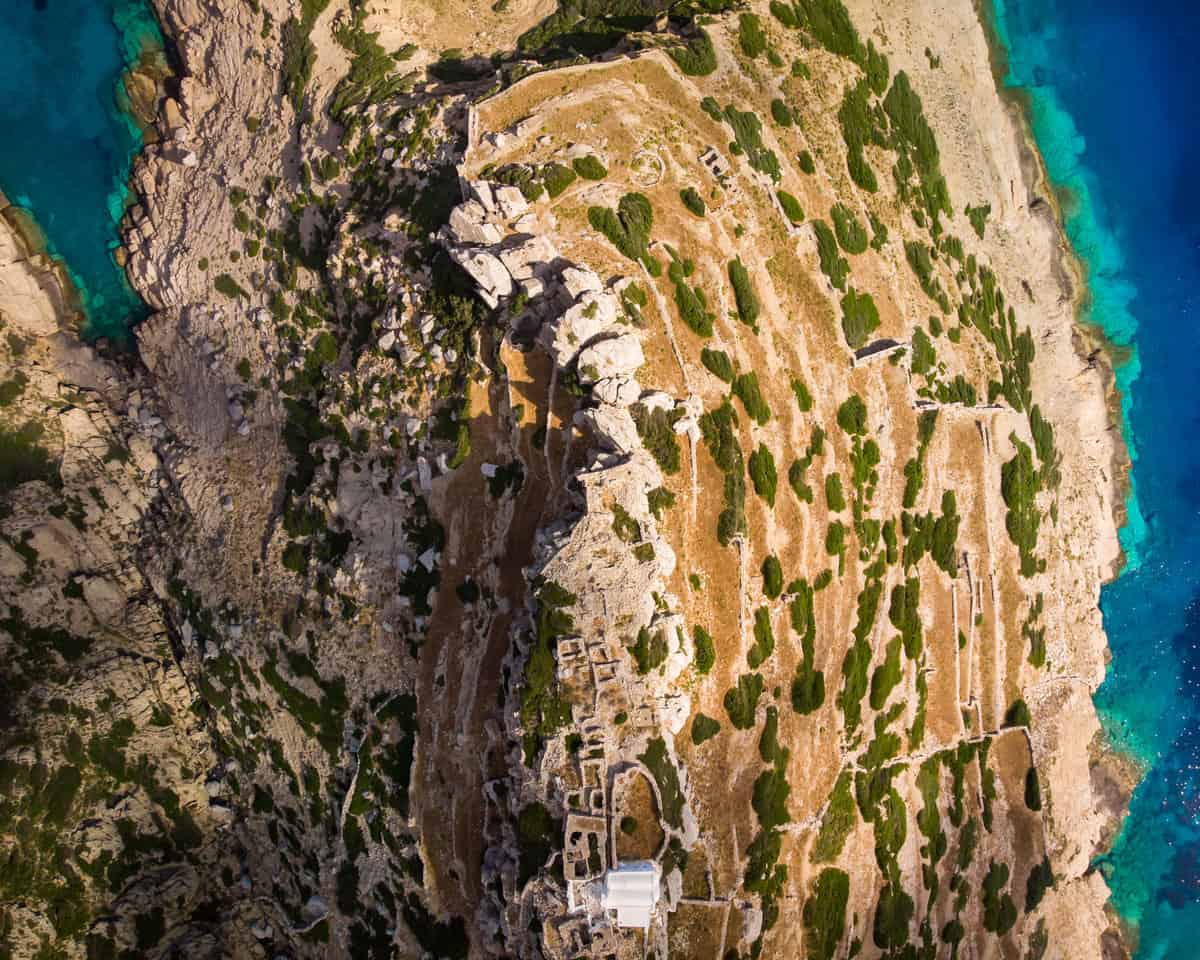 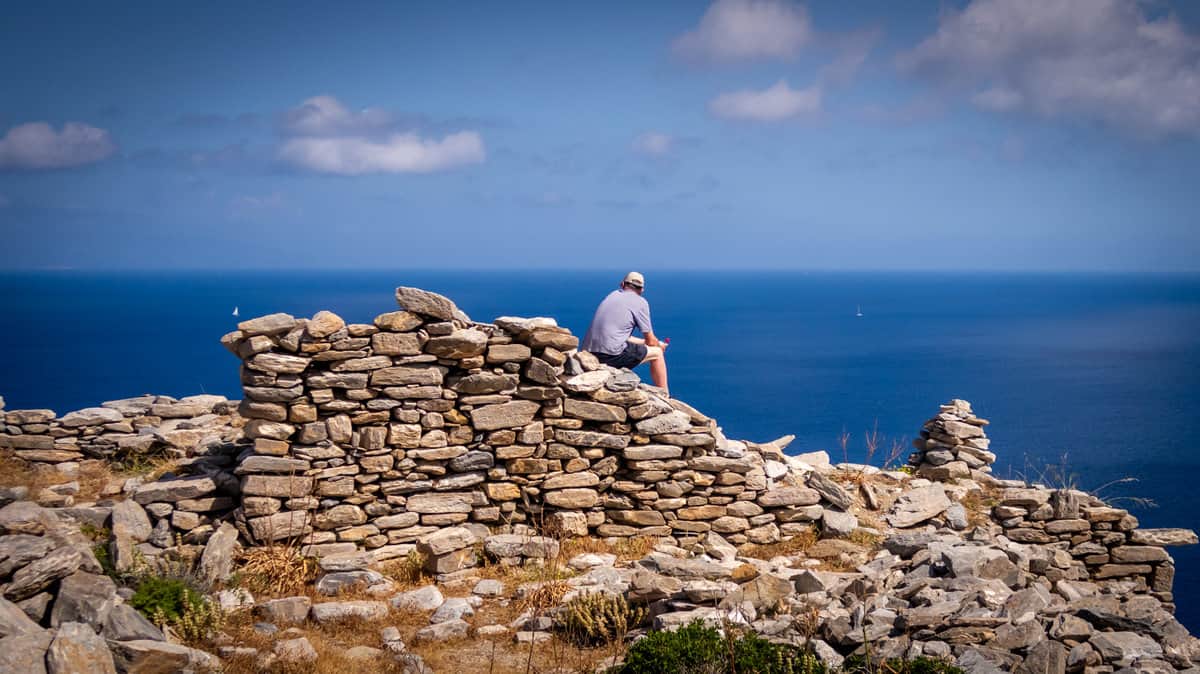 At this point we had intended to continue onto a place on Ed’s map called Mavri Miti, but we couldn’t seem to find the turning off the main road to reach it. Instead we carried on to a small bay called Paradise Beach, which was indeed tiny but worthy of a quick selfie: 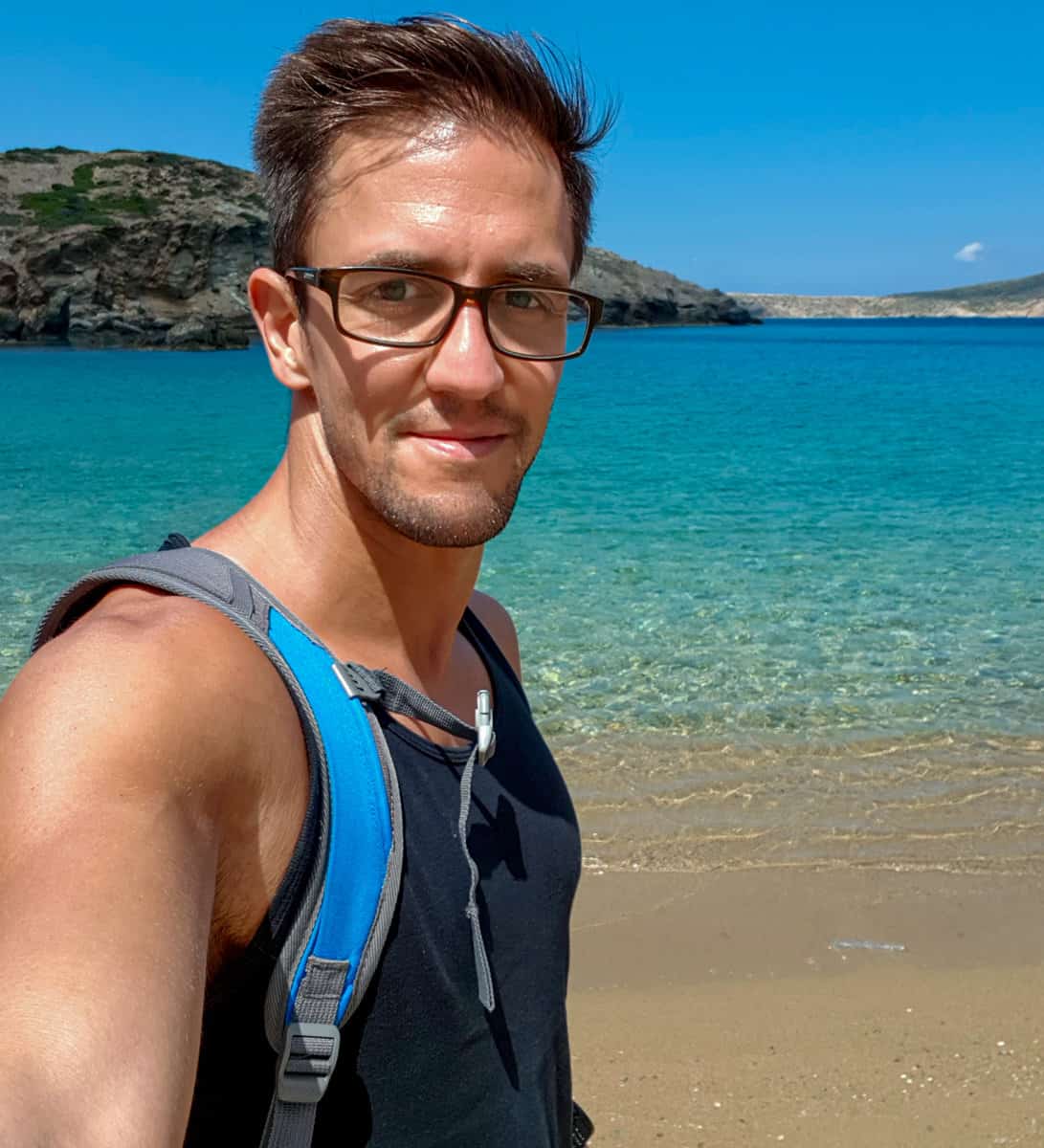 Our final stop was Kalotaritissa beach at the farthest western tip of the island. We had spotted on Google Maps that there was a café here but weren’t sure if it would be open or not. Luckily it was, and we had quite a nice Greek salad, some chips and a couple of small cans of Mythos while sat under the shade of some trees. 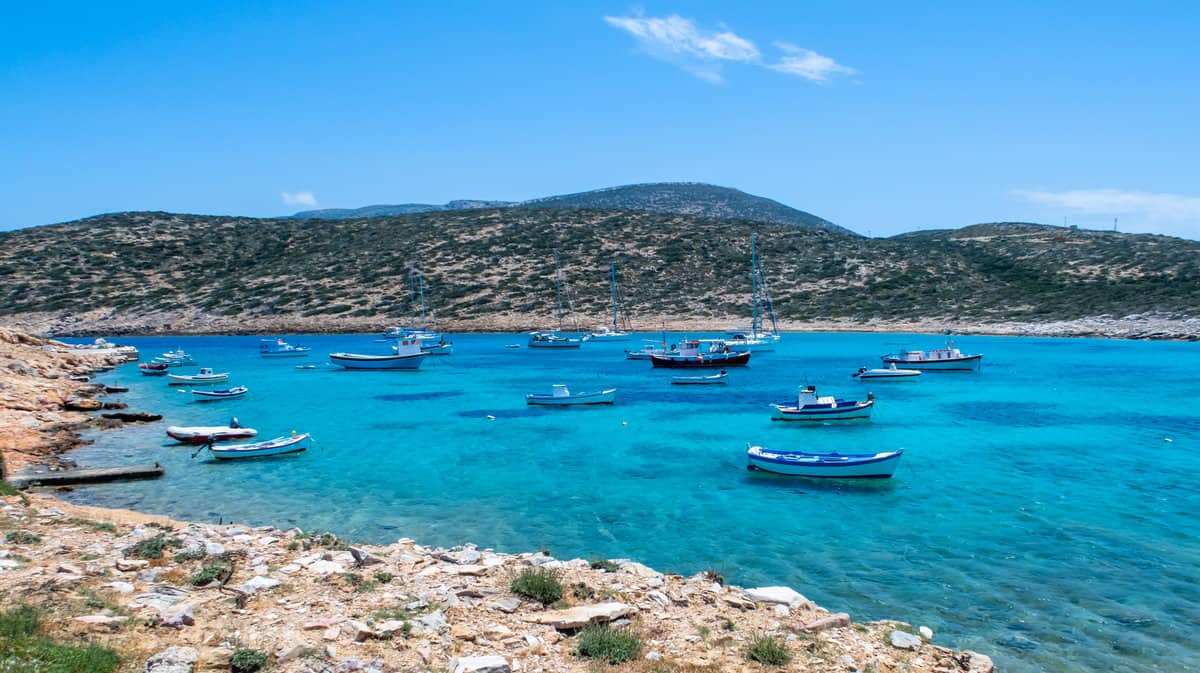 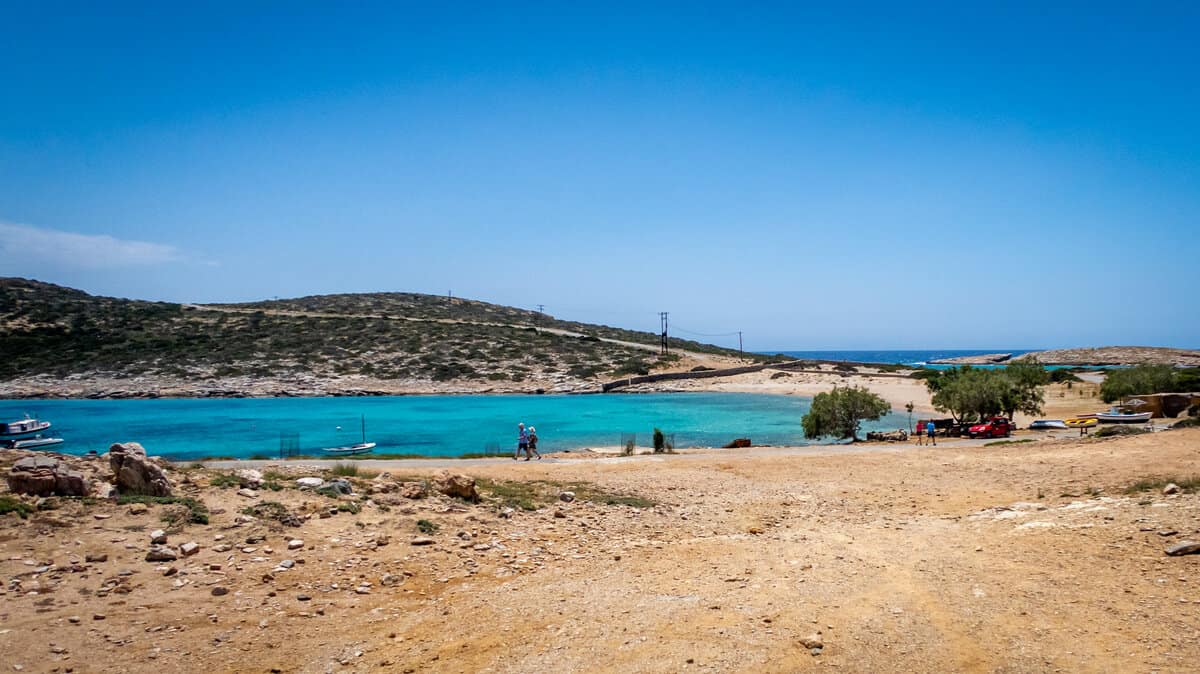 It’s a pleasant spot, though the sea is a bit rocky close to the shore, as we found out when we got changed and decided to have a dip! Ed almost slipped over trying to enter the sea via the small concrete jetty that sloped into the water. Somehow I managed to navigate the rocks instead, and with the aid of my goggles got in safely.

The water was still pretty cold, as expected this early in the season, but it was nice to cool off and have a splash around.

On the way back towards Katapola, we stopped briefly at Agia Triada to see the ruins of an ancient tower, which was okay but not really picture worthy. We discussed heading north past Chora and back towards Aegiali, as it was still early afternoon, but agreed there wasn’t anything we particularly wanted to see, and we would need to buy more fuel to travel any further.

Instead, we drove back to the hotel and spent a few hours by the pool, then drove the car back to the car park and dropped the keys off around 6:30pm. We hadn’t been asked to pay upfront either, so we gave the owner 25€ cash along with the keys and he seemed happy enough – it’s nice finding places that are still trusting enough to do this, even if the car wasn’t brand new.

For dinner, Ed and I both fancied pizza, and we’d seen some on the menu at Corner Taverna so, having had such a nice lunch there yesterday, went back again. The pizzas were huge! I couldn’t finish mine, despite being hungry, but Ed managed to put away all of his veggie pizza:

Feeling in the mood to prolong our last full day on the island, we then went in search of a bar to have a drink or two. There isn’t a lot of choice in Katapola, but we landed at the cosy Moon Bar on the north side of the bay. I wasn’t sure what to drink, so the waitress recommended a B52 cocktail which I quite enjoyed, while Ed had his usual beer.

We sat outside in the setting sun, reflecting on a great day’s sightseeing, and an enjoyable trip so far. Ed has already decided to return to Amorgos in search of more walking paths. I would come back as well: the island has a very peaceful and traditional Greek atmosphere which you don’t find anymore on the more touristy destinations.

Back at the hotel, we had an ouzo at the pool bar as a nightcap, though they were such big measures that I gave up on mine half way. Ed duly stepped up and finished it, then we sloped off back to our rooms and had yet another great night’s sleep.