Today we relocated from our initial base in Aegiali to Katapola. We decided to switch hotels to experience as much of the island as possible, as well as making it easier to get to our ferry which departs from Katapola in a couple of days.

As the only bus to Chora from Aegiali didn’t leave until 11:15, Ed decided to start early on a short hike to Tholaria (we’d missed it on our first day). I took the easy option of sunbathing at the pool – my knee was quite sore from yesterday’s big walk and I didn’t want to make it worse and not be able to get around for the rest of the trip.

Bags packed, we checked out of the hotel at 11:00 and were pleased to discover that not only did our prepaid rate include the local tourist tax (didn’t think that was possible!), but the Ouzo we’d ordered on Friday evening was free, compliments of the hotel!

It’s just a 5-minute walk down to the town square to the bus stop: the benefits of such a small resort, everything being close at hand. The bus arrived on schedule – giving me just enough time to get a couple of quick photos:

The journey took about 40 minutes in total, as it stops off at Chora and then goes down to the monastery before heading on to Katapola. As we weren’t due to check in to our next hotel until 14:00, we walked down towards the port at the south side of the bay to explore and find somewhere for lunch.

We stopped at Corner Taverna on the way back as I recalled it being recommended on TripAdvisor. It turned out to be a great decision as we thoroughly enjoyed our gyros, chips and beer! We then popped along to FM Rent a Car – also a TripAdvisor recommendation – and reserved a car for tomorrow for just 25€ which seemed pretty reasonable.

Tomorrow’s transportation sorted and feeling nicely full, we decided to make our way to the hotel even though we were still a bit early. The walk was slightly longer than expected, and quite warm work in the heat of the day. On arrival, we followed the signs towards the pool and found reception just on the right. As we approached, a lady came out who turned out to be Georgia, the hotel manager. For some reason, she hadn’t been expecting us for several hours but greeted us with a warm welcome and said our room was ready anyway.

Following Georgia back around the pool, we were shown to our family room which was called Kisiri, and turned out to be more of a studio as it included a small kitchenette and dining area:

The rooms were immaculate and well furnished with everything you could need for a comfortable stay.

We both agreed it would be rude not to make use of the lovely pool area, so after a quick change into swimwear, we went for a cooling dip and then dried off on the sun-loungers and enjoyed a nice cold beer (there’s a theme here, in case you haven’t noticed). After an hour, Ed was feeling restless and decided he needed a walk, so headed off to see Ancient Minoa just south of Katapola. Meanwhile, I again took the easy option of staying at the pool (you can’t rush recovery on knee injuries!) and read my Kindle in-between regular dips to cool off.

Ed returned about 5pm and we agreed to do the short hike around the north side of Katapola bay before dinner. This followed a marked path from the north-western end of Katapola, around the coastline towards Plakes beach. The total round trip from near our hotel and back to Katapola beach was just under 5km, as shown on my Garmin data below: 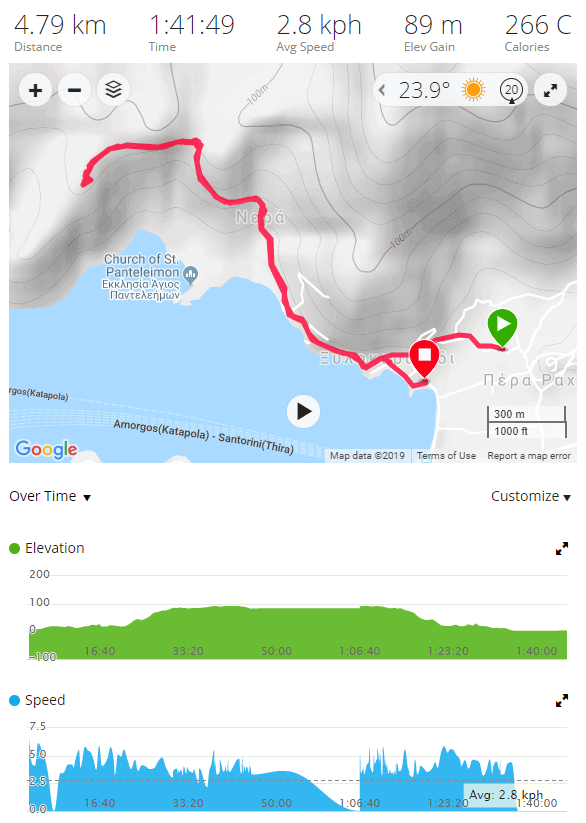 As it was early evening, the light was excellent for taking drone footage and I got some good shots: 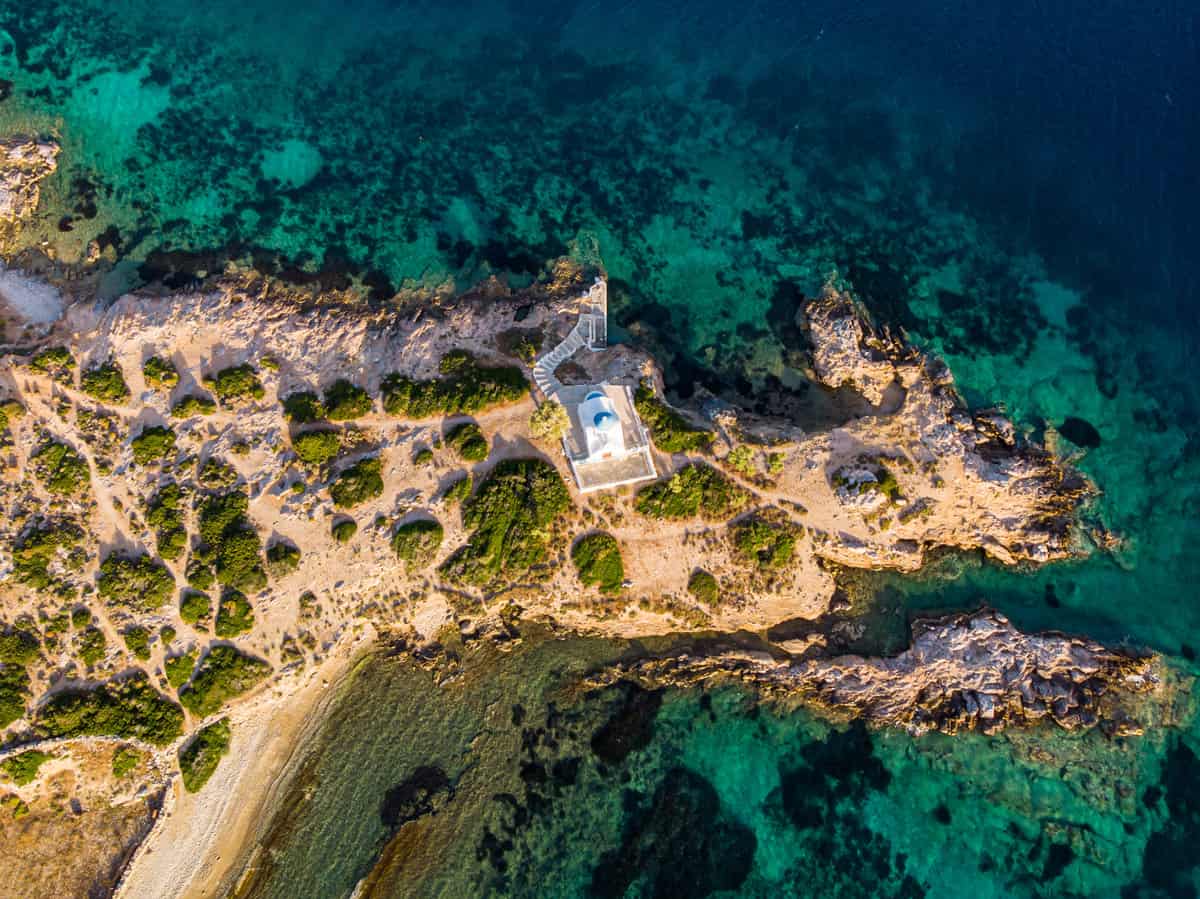 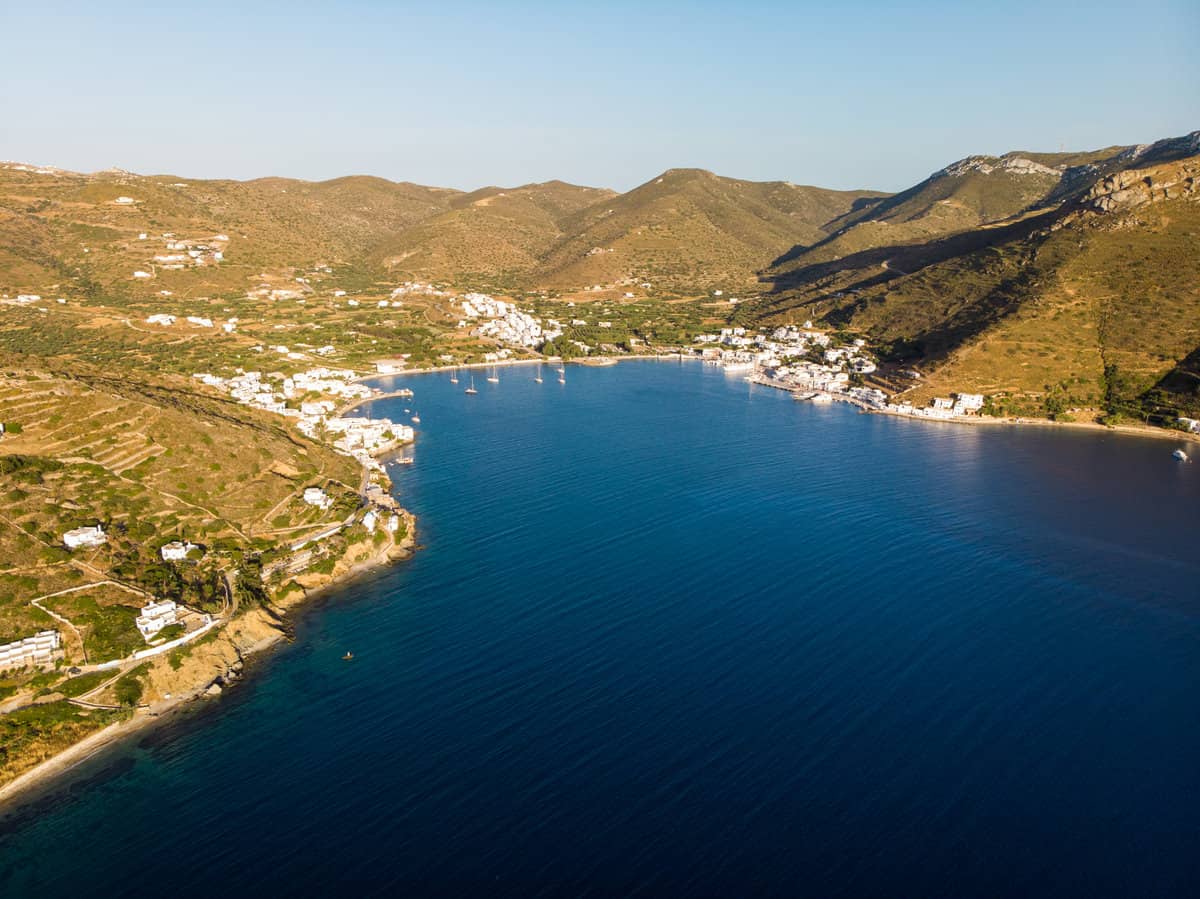 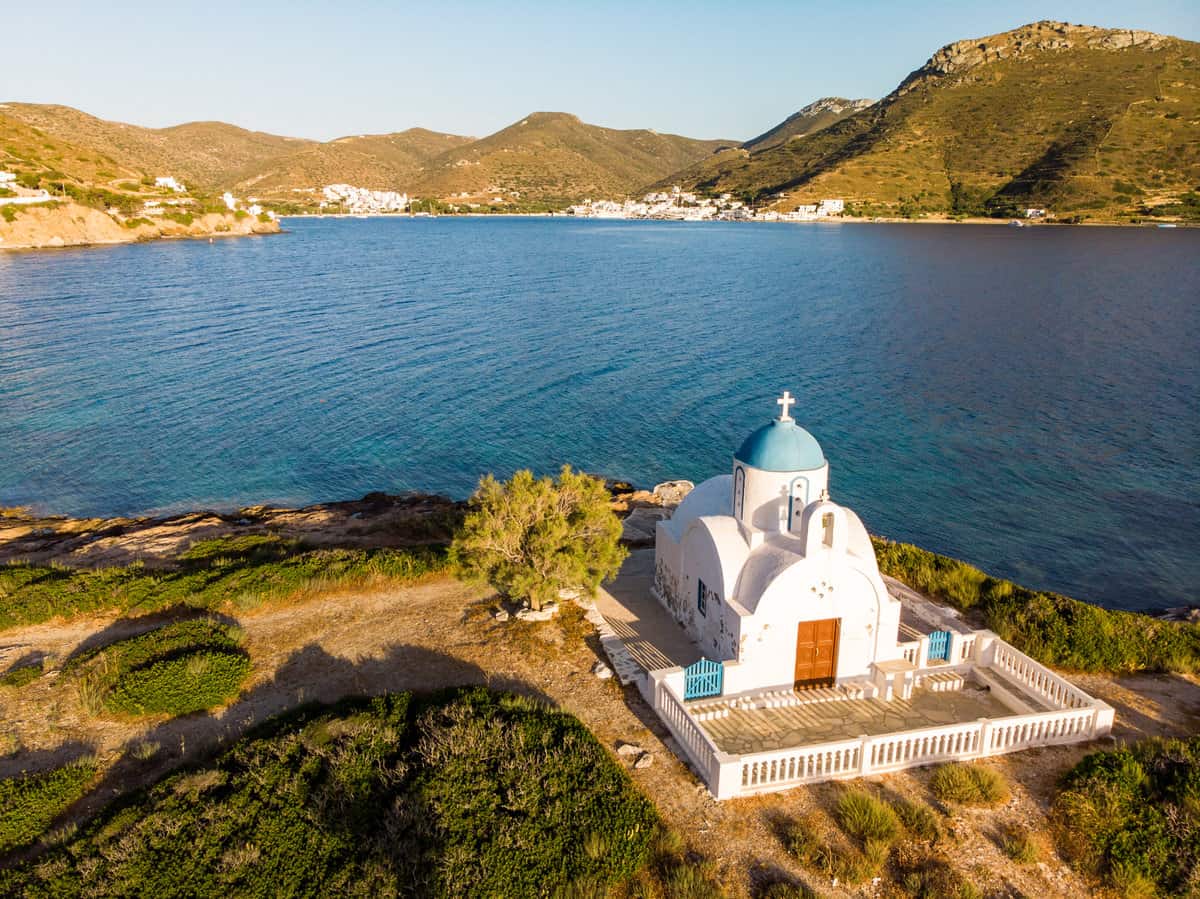 We arrived back in Katapola just after 8pm and were more than ready for some good food. After passing several tavernas on the north side of the bay, we settled on Youkali as the menu sounded pretty interesting. Ed and I shared a starter dish of potatoes with mushrooms and caramelised onion, followed by a leek pie for Ed while I had a chicken dish with cream, mint and feta. We also couldn’t resist the chocolate pot for pudding and some dessert wine. It was all excellent and reasonably priced too. We were treated to some free honey Raki with the bill as well, Yammas!

Feeling a touch merry, we began strolling back to the hotel, which turned out to be quite eventful as the streets behind the beach aren’t lit at night. I had to resort to the torch on my mobile phone so we could see anything. To make matters worse, Google decided to direct us through an overgrown field (possibly someone’s garden!) before joining back to the road near the hotel. Still, we made it back in one piece and I was glad of the comfortable double bed, falling asleep almost immediately.