So today’s the day my friend (and guide) Ed flies back home and I continue my adventure as a solo traveller. I have to admit I wasn’t looking forward to it seeing as it was my first time travelling alone by ferry and Greek buses, but having done so together these past few days I’m much happier that it’s actually pretty easy to do. The ferries are generally on time and getting tickets has been a breeze – opposite each port are always a selection of ticket offices, all offering the same routes and generally at the same fixed prices, so it really doesn’t matter which one you pick and they’re pretty hard to miss. Buses are also frequent and inexpensive – though often busy at this time of year – so finding a seat is the only real mission there.

As my friend’s flight was early afternoon, I’d decided to get a similarly-timed ferry so that we would both leave the hotel around midday. We took the morning to have breakfast, relax by the pool and finally pack our belongings and leave our wonderful rooms behind. My friend had decided to walk to the airport as it was only a couple of km away, and he’s an adventurous soul (and keen to save a taxi fare wherever possible!) but I asked the hotel reception to organise a taxi for me as the port is too far to walk. This proved to be the most stressful part of the day as they couldn’t book it in advance, so when I turned up at 11:45 and ask them to call the taxi, they couldn’t get through to them despite repeated attempts. (I assume there is only a single taxi company covering the island, at least they were only trying one number!) As my ferry was at 1pm and I wanted to get there in time to buy my ticket, you can imagine I was getting rather anxious at this point, having no contingency plan other than trying to walk it which would take too long and be very dangerous on the small roads as I mentioned before. Finally a friend of the hotel owner offered to drive me down, which I gladly accepted and we set off with plenty of time to spare. When we arrived I gave the driver a generous €10 tip as he said the transfer was no charge and a taxi would undoubtedly have cost more anyway.

During the boarding process, while stowing my case with the rest of the luggage in the ship’s cargo area, a couple of young British girls asked if they could squeeze their case into the same compartment as mine so that it wouldn’t move around or fall out if the crossing was wavy. Being on my own I decided to seize the opportunity to make some friends, so I gladly helped them with the suitcase stowing and we headed up to find some seats together. After getting to know them for a bit, it turned out that we were all doing the same sequence of islands (until I headed off to Crete anyway), albeit with only slightly overlapping dates in some cases. Still I felt lucky to have made some friends straight away and after we got off the ferry we agreed to meet later in the evening for dinner and maybe a drink or two. 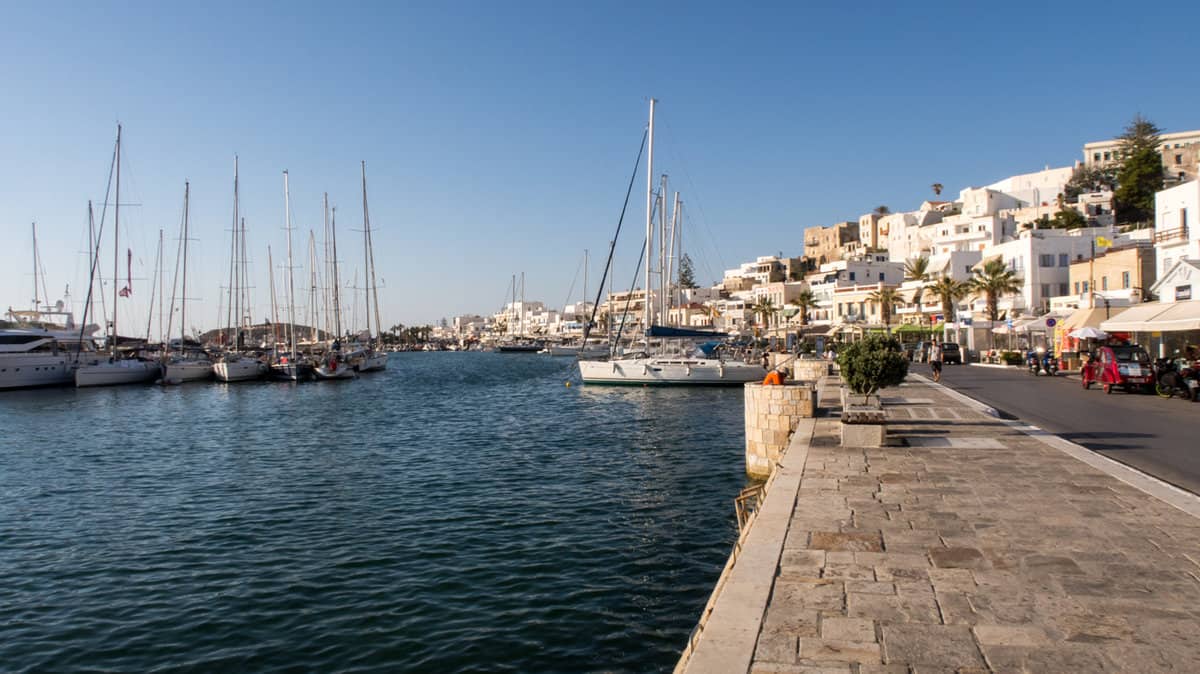 First view of Naxos town after leaving the ferry. This is looking north towards the Kastro and Apollo’s Gate (not visible).

Getting to my hotel proved to be a little more awkward than I’d hoped: it was only a 1.7km walk and according to Google Maps I could follow the road to the beach and then take a dirt track that ran behind some buildings, then pop briefly onto the beach front and enter the hotel from there. Unfortunately access via the dirt track was blocked half way down by a fence, so I had to back track and walk mostly along the beach instead. It wasn’t terrible as most of the way there were raised wooden slats to drag my case along, but at a few points these stopped and getting my case through the sand was a lot of hard work! Eventually I got to the hotel and checked in to a lovely ground floor room just a short walk from the pool and restaurant area. After a quick dip to cool off, I sat by the pool for a while and then went back to the room to cool off, shower and get ready to head back into Naxos town to meet my new friends for dinner.

Arriving in the town quite early, I decided to use the time to walk up to Apollo’s Gate and take a few pictures, even though it was too early for a proper sunset photo. 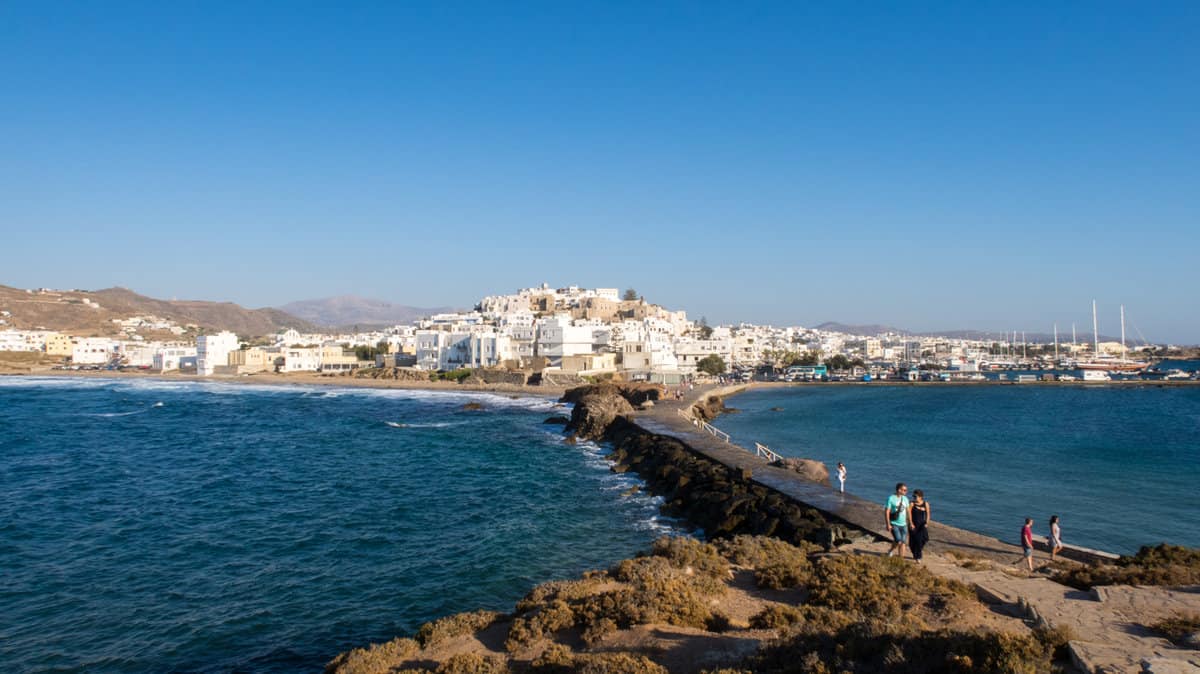 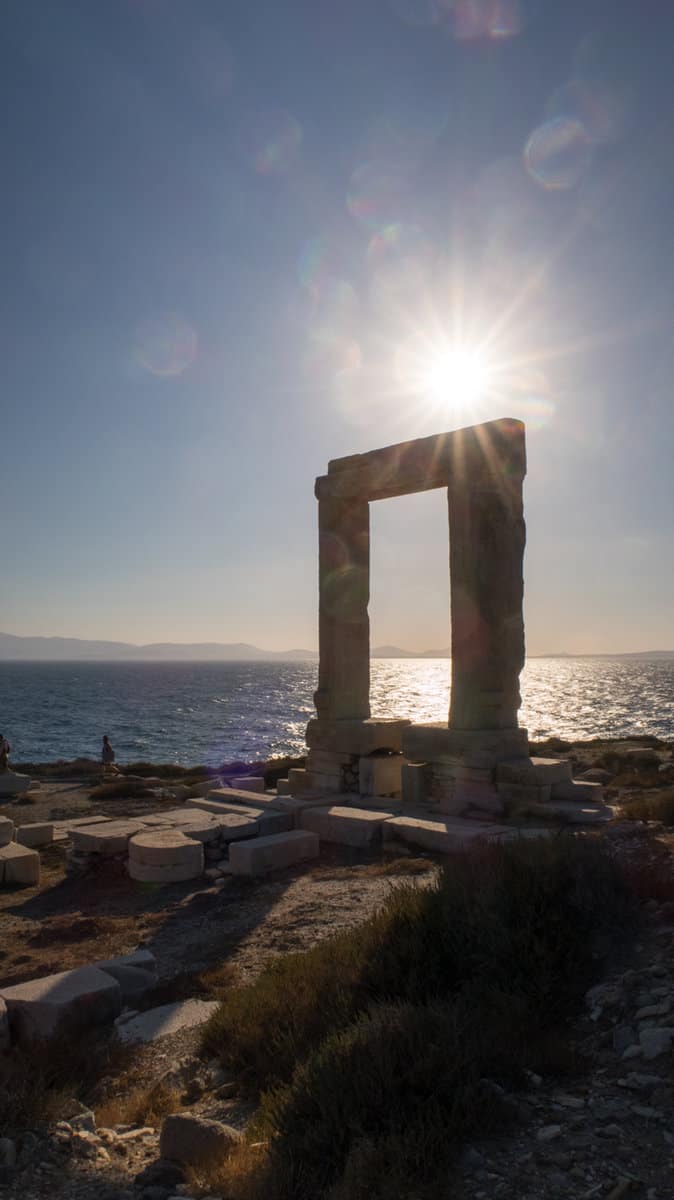 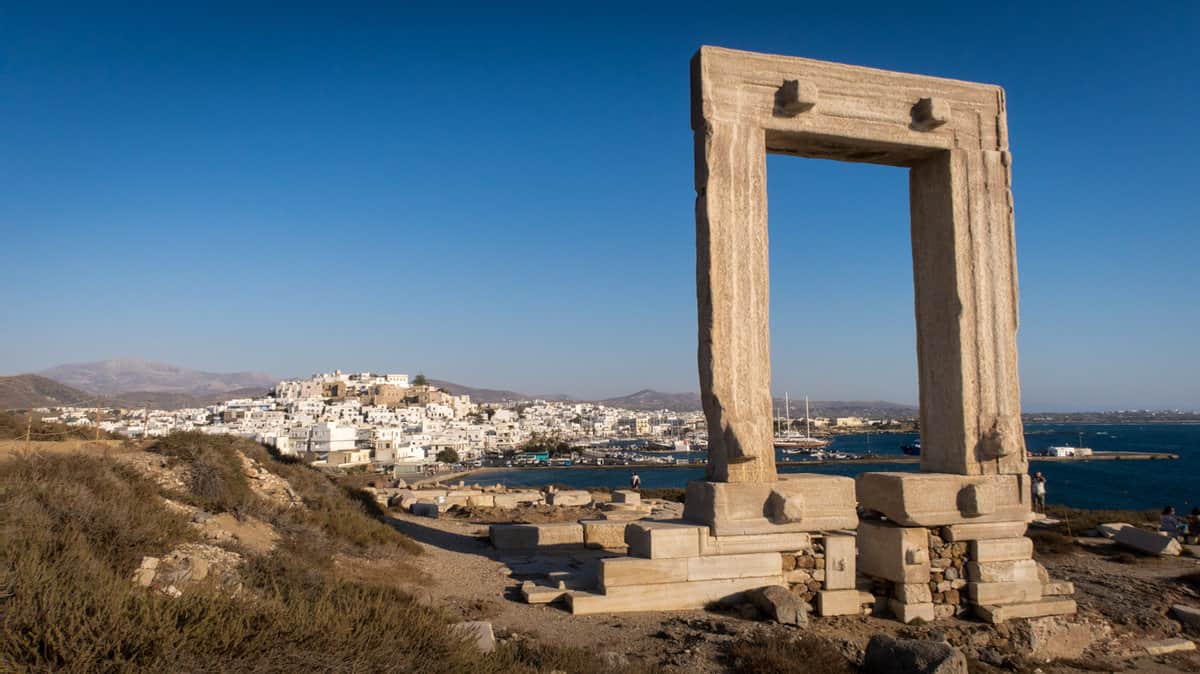 Not-quite-sunset shots (apologies for the dirty lens in the first photo). Apollo’s Gate with Naxos town in the background of the second image.

That done, I walked leisurely back to the harbour front and sat in a cafe to have a beer and wait for my friends to arrive. Once I spotted them, we had a walk back towards Apollo’s gate direction and found a nice looking taverna to sit and have some food. I had a moussaka which was very nice and we shared some wine and chatted the evening away. Afterwards we found a bar close by and sat to play some cards and have a drink which was great fun. I learned a whole new (and probably unofficial) way to play Rummy which took some getting used to – I think I lost every time – but it was fun all the same.

We then headed back to our separate hotels and I had a good night’s sleep in a very comfortable double bed!