We checked out of our hotels early to catch the mid-morning ferry to Mykonos. Originally we’d planned on getting an even earlier ferry to give us time to visit Delos once we got to Mykonos. However, we reluctantly agreed that although Delos would be great to see, with only one night on Mykonos and a fairly expensive hotel, we’d skip it and instead spend a bit of time enjoying the hotel pool and visiting some nearby beaches.

On arrival in Mykonos we had to get a taxi to the hotel as it was about 5km from the port. The island is very pretty as you’d expect, although the roads are quite narrow and mostly lined with low painted stone walls either side which not only makes walking fairly dangerous but means passing oncoming traffic is awkward at times. Coupled with the number of scooters and quad bikes used by tourists in high season and it’s not particularly quick to get anywhere on the island. We did eventually reach our hotel though, and what a fantastic one it is! The Anna Maria Mykonos Hotel is amazing: 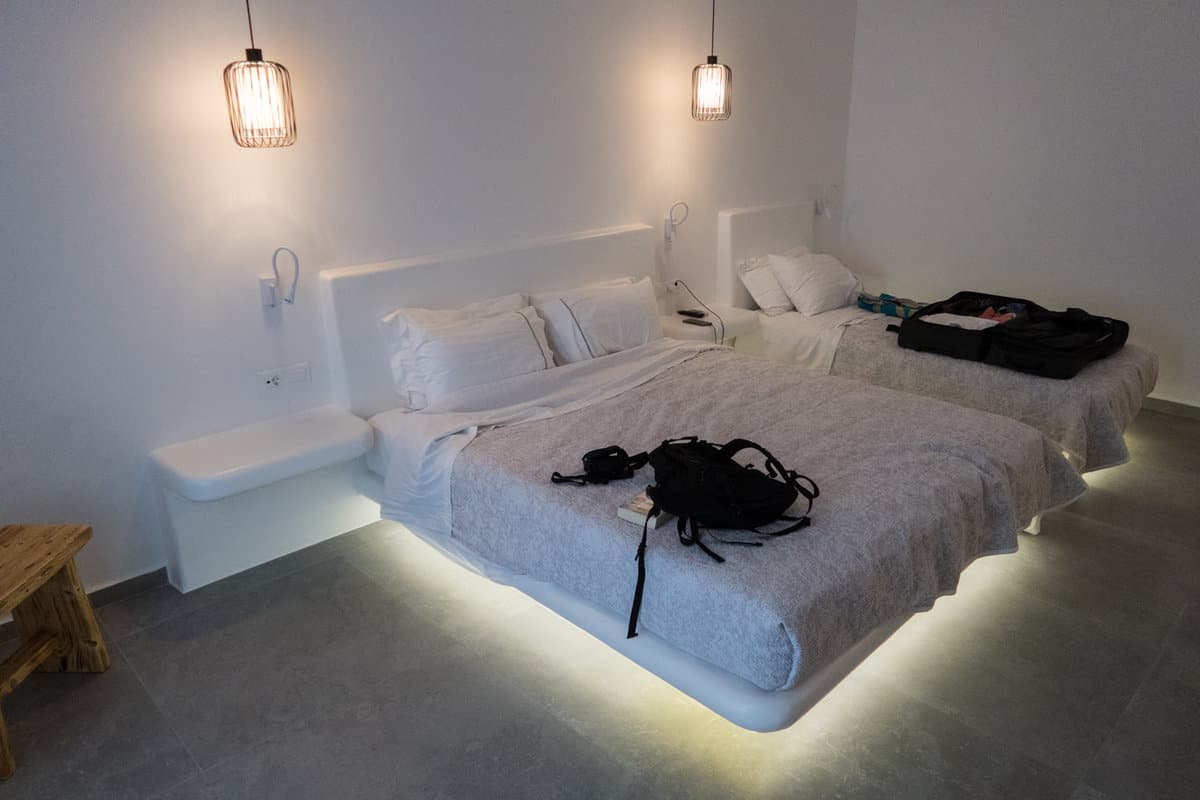 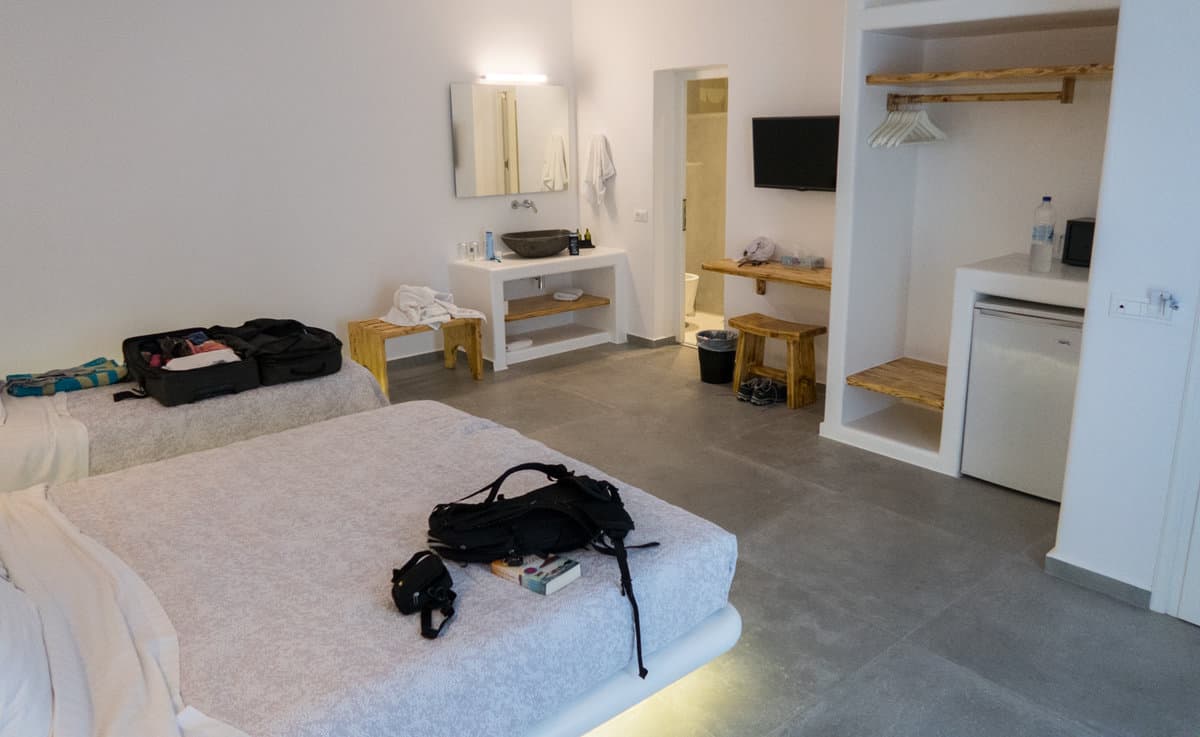 Rooms are a real luxury: spacious, cool, modern and the bed was fantastic!

I’m not sure if the photos even do justice to how clean, modern and spacious our rooms were, but as you can see we each had a room with a double AND single bed. The pool area is just as nice and managed to feel very quiet and secluded despite not being that far from the road or neighbouring properties. I would highly recommend it, although I’m sure there are cheaper options out there for the more budget-minded individual. 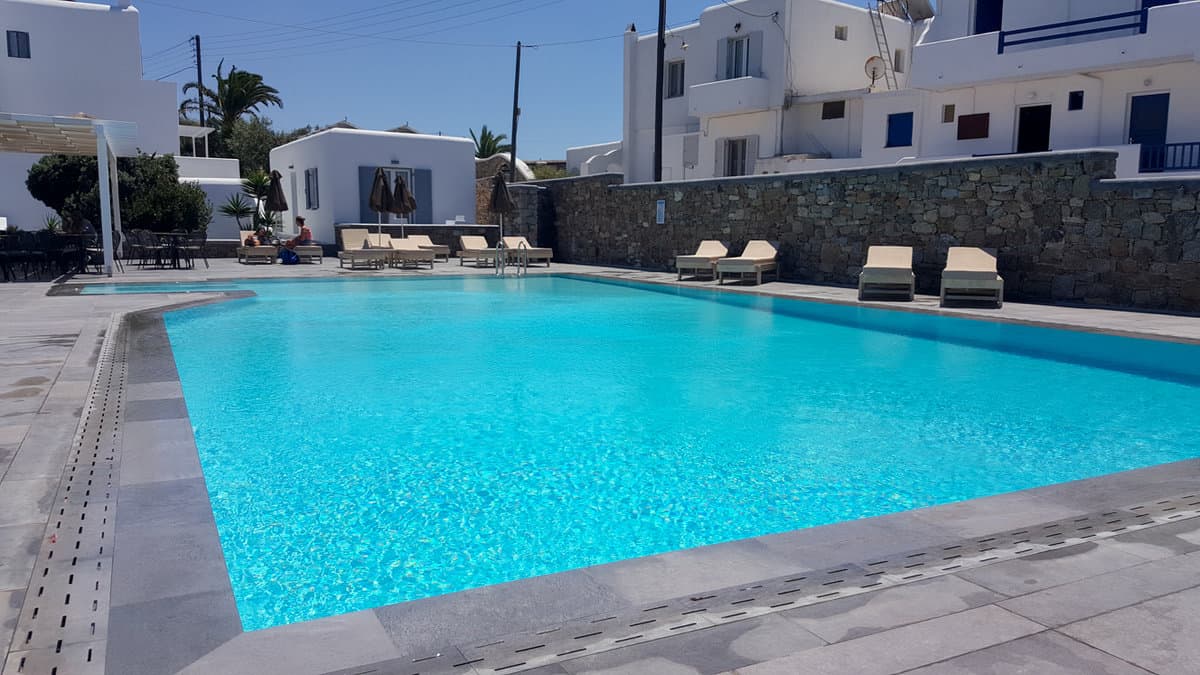 Once we’d recovered from the shock of our hotel rooms, we went out to the pool to have a swim and a snack lunch before getting the bus (there’s a stop just down the road) to Psarou beach. From there we walked along each beach on the coastline east until we reached the well known Paradise beach! If I’m being honest it’s not my idea of paradise at all – packed with sunbeds and what seemed to be mostly young, wealthy American and Australian tourists behaving in a fairly entitled way. However the beach itself is nice, and we wanted to experience a bit of the Mykonos atmosphere so we sat and had a beer (a €7 bottled Mythos no less) at the Paradise Beach Club and chilled out under the shade for a little while.

Feeling only slightly merry but unwilling to trade vital organs to buy more alcohol, we walked to the bus stop and called for a taxi back to the hotel so we could get ready to go out to Mykonos town to see the windmills and watch the sunset, then get some food and stay out for a few drinks.