After a quick (and slightly disappointing) breakfast at the hotel, we set off in our little VW Polo towards Filoti for the start of our Mount Zas hike. The drive takes about 30 minutes and is quite pleasant due to the lack of traffic compared to British roads. As you head inland, it becomes greener and more rural than you would typically find along the coastline.

We had decided to do the more difficult hike starting from the front of Mount Zas: walking from Filoti past the Aria spring and Zeus’ cave, before scrambling upwards to the left side of the peak. It is a signposted route and not exceptionally hard, but still more challenging than any of my previous Greek walks. As we had started early, the heat wasn’t an issue and the early part of the walk is largely shaded anyway, initially by trees and later by being in the crevice that joins two adjacent rock faces. As we neared the summit though, the sun definitely added to the challenge and we were pretty sweaty by the time we reached the top.

The ascent took around two hours and was worth every bead of sweat: the view from the top is truly breathtaking! 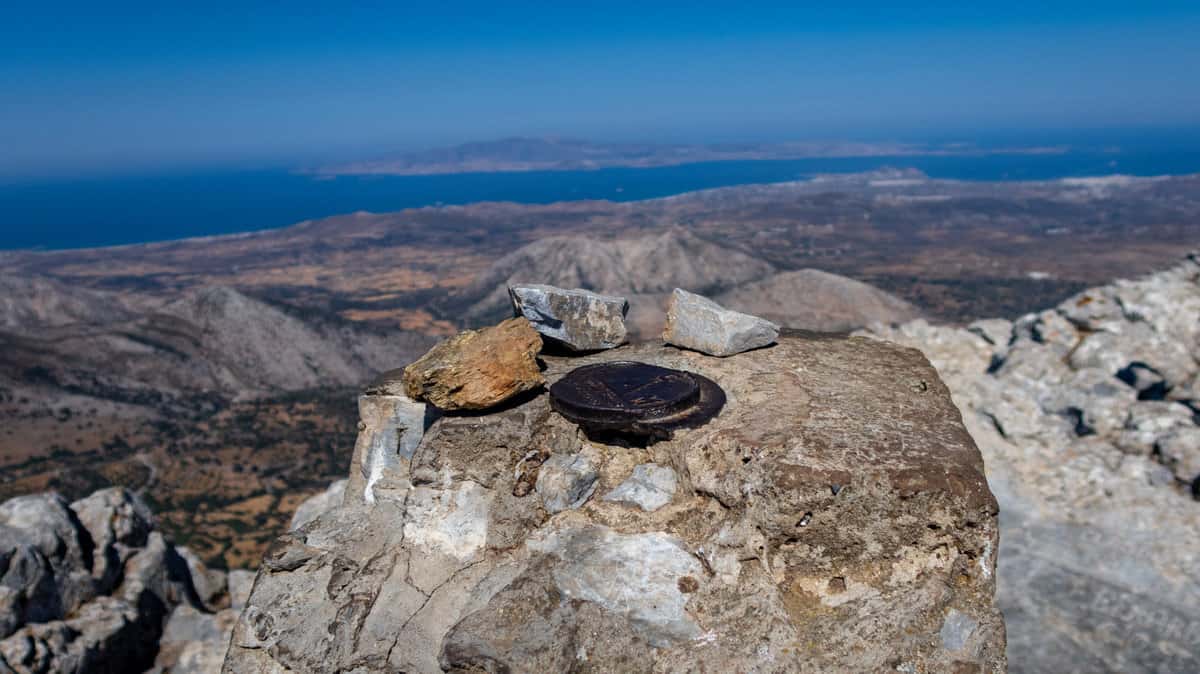 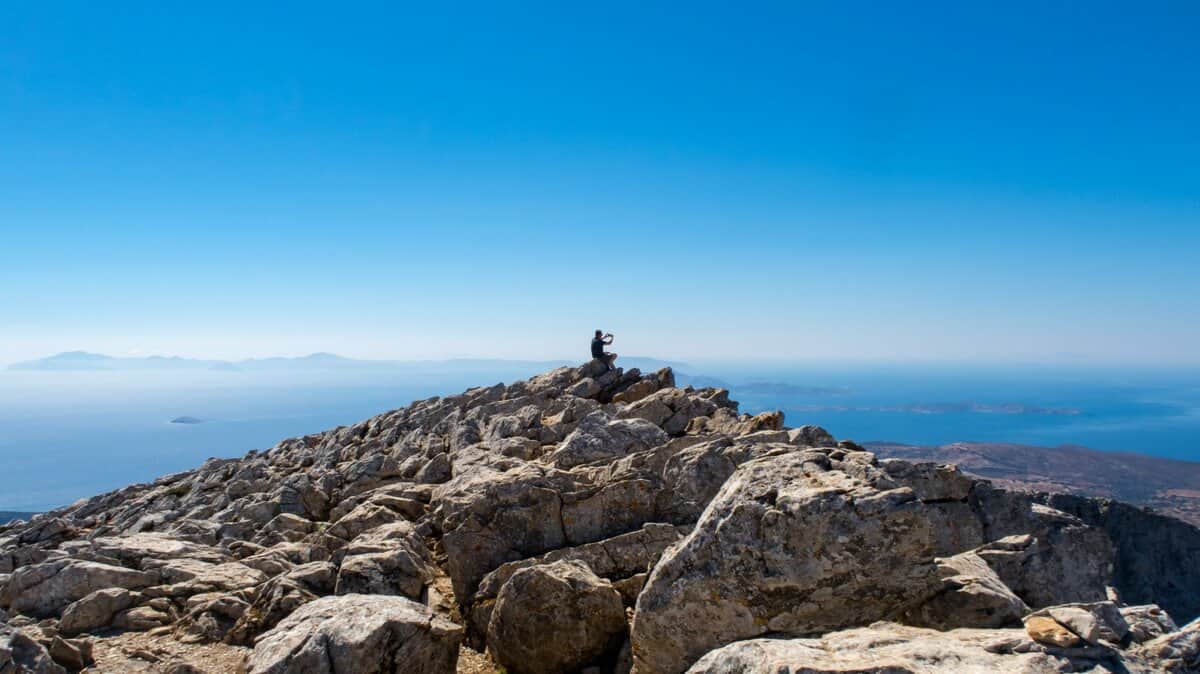 The circular iron marker indicates the summit of Mount Zas (Zeus) 1,003m above sea level – the highest point in the Cyclades. In the background of the top photo, you can see Naxos town on the right and the island of Paros in the distance. The second photo faces south: the hilly island in the far distance on the left I believe is Amorgos, with Iraklia and Schinoussa on the right, and Koufonissi in the centre.

On the way down I managed to hurt my ankle stepping on some uneven rocks, but luckily it wasn’t too bad and only slowed us down a little. We took the path that leads northeast down the mountain, joining a small road at Agia Marina church before heading west towards Filoti. This took us past the Prophet Elias Church, which sits impressively on a hill overlooking the village. I couldn’t resist popping the drone out again to get some aerial photos: 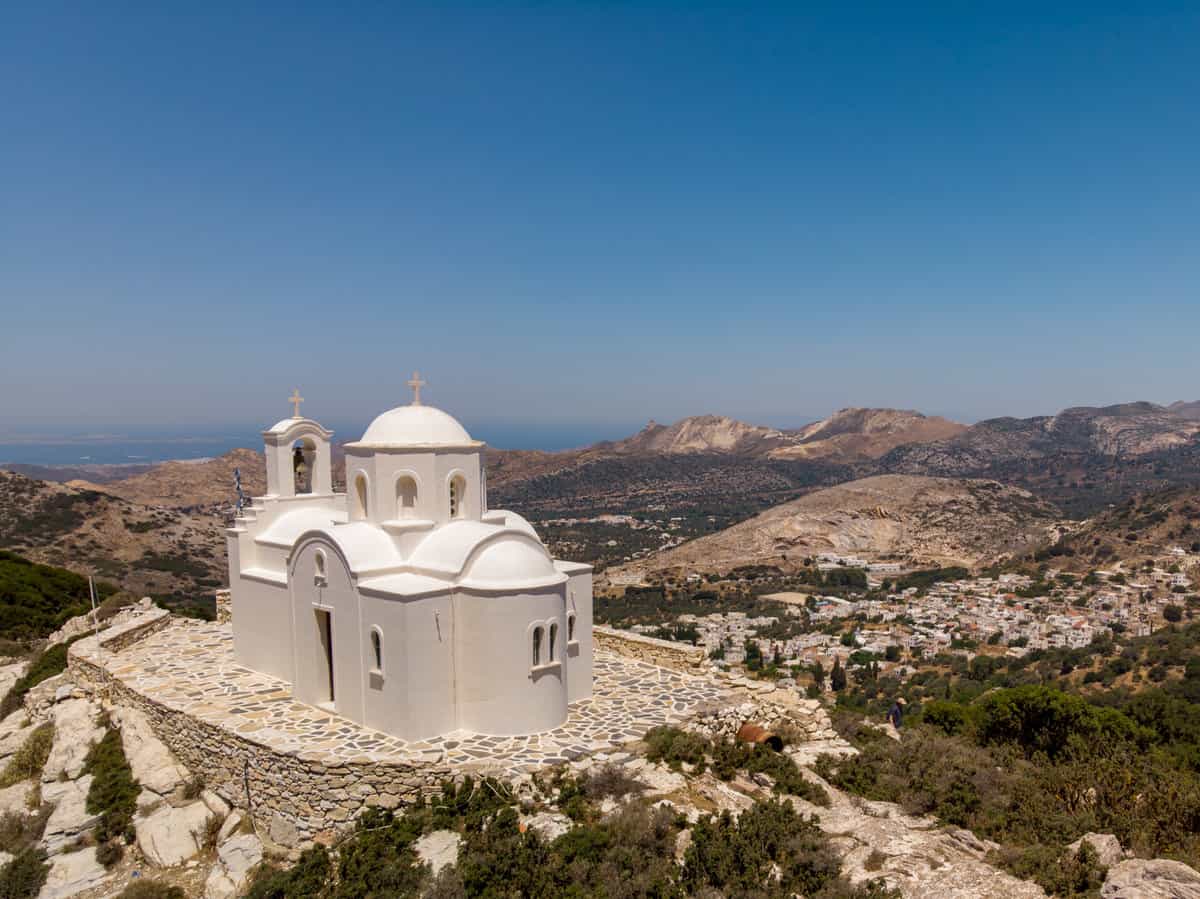 We made it back to Filoti around midday, stopping for a nice lunch at one of the tavernas we had passed on the drive into the village earlier that morning. It was definitely a relief to take the weight off my legs!

Back at the car, we had originally thought about driving south-west towards the coast, stopping at the Temple of Demeter before heading on to the south end of Plaka beach, but having read some mixed reviews about the temple, we decided to head north instead and save the beach for another trip.

We drove through Apeiranthos (another very pretty village) and onwards until we reached Apollonas on the northeast coast. It was a long drive and, unfortunately, Apollonas wasn’t really that nice, but we stopped for a coffee and cake anyway before completing the journey back to Naxos Town via the coastal road.

Arriving back late afternoon, we parked the car, gave the keys back to the rental shop and then walked back to the hotel for a shower and change before dinner.

There was an England World Cup game on, so after eating we found a good spot in a bar along the harbour front and sat down to enjoy the game. England managed to win on penalties (a rare event indeed!), and we had a few too many drinks owing to some very friendly Swedes who were watching the game with interest to see who their team would be playing in the quarter finals!

After the match had ended, we tried to keep the night alive by visiting a few local bars, but some of them were pretty dead so we eventually gave up and staggered back to our rooms just after midnight.